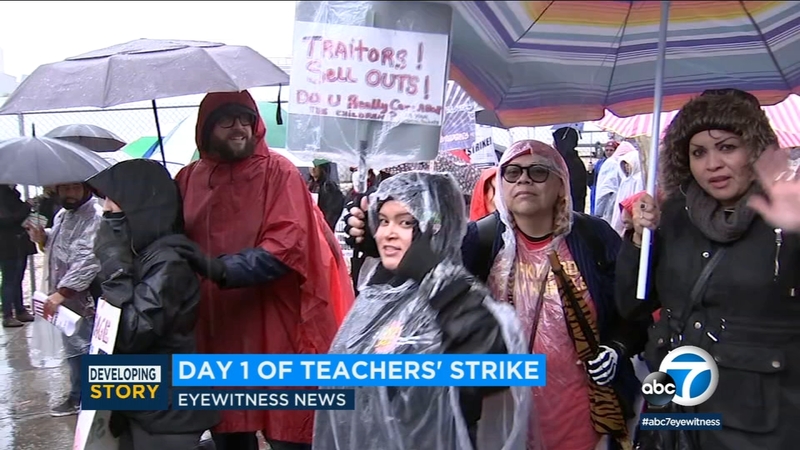 LOS ANGELES (KABC) -- A new exclusive Eyewitness News poll shows broad support in Los Angeles for the thousands of teachers who are now on strike.

The SurveyUSA poll found that almost two-thirds of people polled support the strike, with 15 percent opposed and about 20 percent unsure.

Nearly three-quarters of the respondents believe that Los Angeles Unified School District teachers are not paid enough and that class sizes in the district are too big.

Asked if they approve of LAUSD Superintendent Austin Beutner's job performance, 30 percent said they disapprove, 15 percent approve and the rest were not sure.

About 30,000 LAUSD teachers went on strike Monday, after United Teachers Los Angeles and the district were unable to reach a new contract deal.

UTLA is seeking changes that include reduced class sizes, more support staff, including nurses and counselors, and salary increases. It is the first strike at LAUSD in 30 years.

Poll respondents were asked to give a letter grade to the performance of the district's schools. Only 6 percent offered an A grade. Another 27 percent graded LAUSD with a B and 36 percent said C. Another 15 percent said D and 5 percent gave a failing grade.