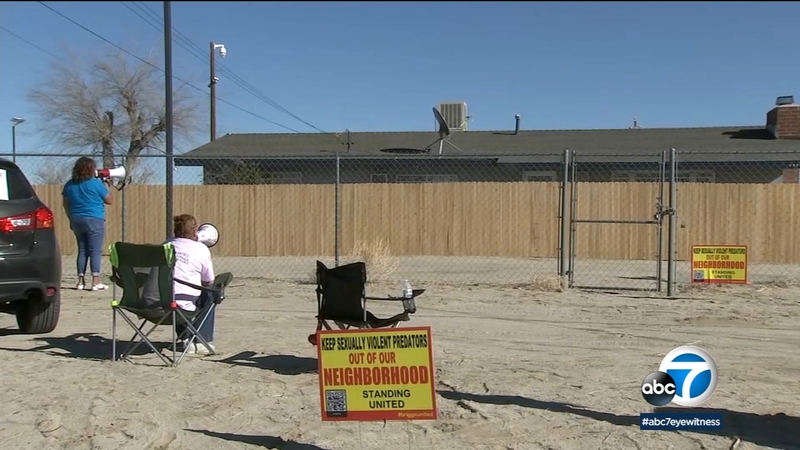 Protest held outside purported home of sexual predator near Palmdale

LANCASTER, Calif. (KABC) -- Lawtis Rhoden has an extensive criminal record, including multiple sexual assault convictions in Southern California. With his recent release from prison, people who live near Palmdale are concerned that the dangerous ex-convict may be living in their community.

"I was a victim of childhood sexual abuse when I was a child for six years," said resident Misty Hach. "It makes me feel super unsafe, having these people get dumped out here, because it's bad enough having regular sex offenders and now we're getting all of the violent ones dumped out here with us."

Hach joined protesters demonstrating with bullhorns outside of the possible Antelope Valley home of the latest violent sexual predator to be placed in the Antelope Valley. Residents in the unincorporated area of Los Angeles County, several miles north of Lancaster, believe Rhoden took up residence in the home late Wednesday night. ABC7 has not been able to confirm that with authorities.

Rhoden has multiple sexual assault convictions in Orange and Los Angeles counties dating back to the mid-1980s.

Hach, who was trembling during an interview with ABC7, said she was terrified. Asked if she would be OK, she replied: "Yeah, I'll be okay. I'm just emotional. It's an emotional thing. I know there are so many victims in our valley and so many other survivors out there like I am."
EMBED More News Videos

Elected officials are speaking out against a judge's decision to allow a sexually violent predator to reside in the Antelope Valley.

Rhoden is one of several violent sexual predators the courts have relocated in the Antelope Valley.

Some Antelope Valley residents say they are fed up.

"It's terrifying, having him be right here," resident Autumn Petty said, referring to Rhoden. "It's horrible."

Contacted by ABC7, Los Angeles County Supervisor Kathryn Barger said: "There are a lot of violent sexual predators who are in line to be released, and I'm going to make sure that the Antelope Valley doesn't become the de-facto placement just because it's the path of least resistance."