Neighborhoods of color east of LAX have some of the highest health risks, data shows

Areas downwind of the airport have respiratory risks higher than 90% of the state. Experts say there is no "magic answer."
KABC
By Ashley Mackey and Grace Manthey 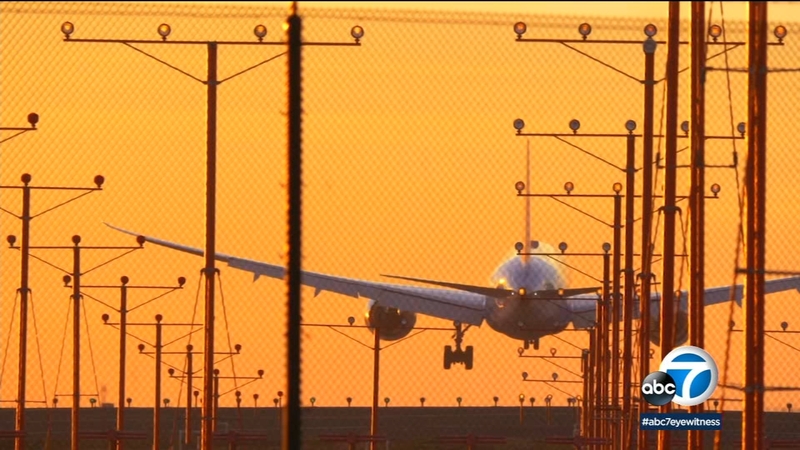 Neighborhoods east of LAX have some of the highest health risks

She has worked at LAX for the last four years, and last year was diagnosed with COPD, an inflammatory lung disease common in smokers. But Houston said she doesn't smoke.

"I've been working in the bag room, directly adjacent to the jetway so the planes take off usually in front of me, so the smoke blows back into the warehouse to where I work," she said. "I breathe that in daily."

It's not just working at the airport that can affect health. Living near LAX can present health challenges as well.

Houston, who still lives near the airport, said her son has asthma and black soot piles up on her windowsills.

"It's just a day to day a battle with this pollution," she said.

That battle is anything but equal.

WHO IS MOST IMPACTED BY POLLUTION RISK?

Federal environmental data analyzed by ABC7 shows that across the Los Angeles metro area, people of color are more likely to live in areas that have a high risk for respiratory illness. 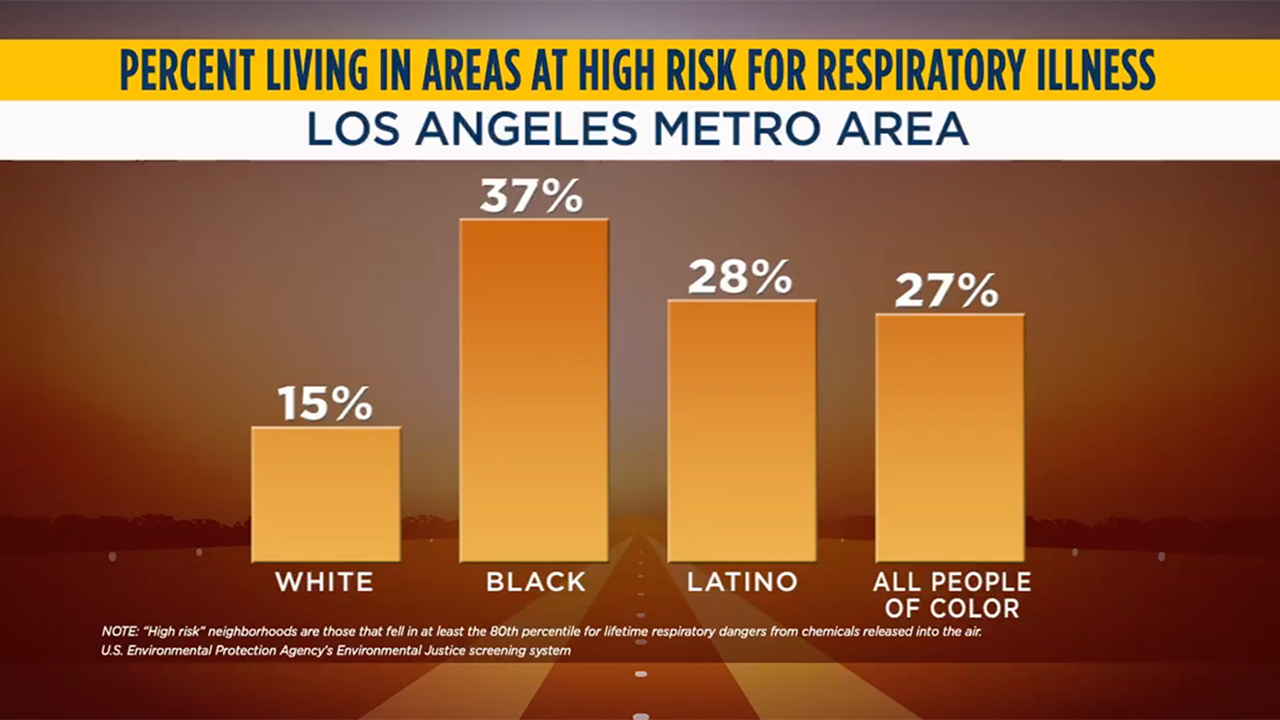 Federal data analyzed by ABC7 shows that across the Los Angeles metro area, people of color are more likely to live in areas that have a high risk for respiratory illness.

Out of all white Angelenos, just 15% live in these high-risk areas, but it's more than a third of Black Angelenos. For Latino Angelenos it's 28%, and 27% of all people of color.

These high-risk neighborhoods are defined as ones that fell in at least the 80th percentile for lifetime respiratory dangers from chemicals released into the air. In other words, these neighborhoods are those that the government's scientists say are in the top 20% for risk in the state.

Our America Equity Report: Explore equity data from the 100 largest cities in America

Respiratory risk data mapped at the neighborhood level shows that some of the highest risk is in small census areas, called block groups, east of LAX.

Many of these block groups have risks in the 99th percentile, meaning they are in the top 1% statewide. Inglewood and Lennox have areas in the 98th and 97th percentiles. Even as far as east of the 110 Freeway some areas are in the 90th percentile.

Most of these areas are communities of color.

There are other areas that have high risks as well, such as those near downtown and the ports.

Map not displaying correctly? Click here to open in a new window

Overall, the CVA data shows the rate of asthma-related emergency room visits countywide is about 52 per 10,000 people. But areas east of LAX, such as U.S. census tracts around Gramercy Place and Harvard Park have rates that are two to three times higher than the county rate overall.

Map not displaying correctly? Click here to open in a new window

Multiple studies looking at airports around the state and country have found links between airport proximity and health problems like asthma, heart issues and even preterm birth.

WHY NEIGHBORHOODS CLOSE TO THE AIRPORT MAY BE VULNERABLE

According to experts, part of the reason these areas east of LAX are so vulnerable to airplane pollution is due to what are called ultrafine particles.

"These are the really small and tiny particles that we know can get deep into the lungs, and we can inhale them, and then they cause inflammation and other respiratory and cardiovascular conditions," said Rima Habre, an associate professor of environmental health and spatial sciences at the USC Keck School of Medicine.

Airplanes emit these particles, especially when they land. About 95% of flights take off and land into winds blowing west to east because that's the typical wind direction of the area, according to a study out of the University of Southern California.

That study, from 2014, found high concentrations of ultrafine particles in an area more than 20 square miles east of the airport, right under the area where planes fly over when they land.

Building off the work of her colleagues, Habre and her team wanted to find out what the health effects were of high concentrations of these particles that aren't regulated because of how difficult they are to measure and capture, she said.

"We know ultrafine particles are a lot more dangerous, potentially, and more toxic than the larger particles that we do regulate," Habre said.

But, she said there have not been enough studies to demonstrate how to regulate ultrafine particles.

"So, we wanted to kind of design a health study that would be able to capture their impacts to start establishing some of that evidence," Habre said.

To do that, Habre and her team had participants with asthma walk around two different parks: Jesse Owens Park, which is about five miles east of the airport and is directly under flight paths of landing planes, and Kenneth Hahn State Park, which is impacted by other kinds of pollution like cars but not airplanes.

For each person, they compared the impact of each park visit, with a week in between.

"Walking at these two different parks, we saw a very significant rise in inflammation markers in the blood," Habre said.

"It increased a lot following...walking downwind of the airport with high ultrafines compared to walking somewhere that did not have that same ultrafine particle mixture from the airport," she continued. 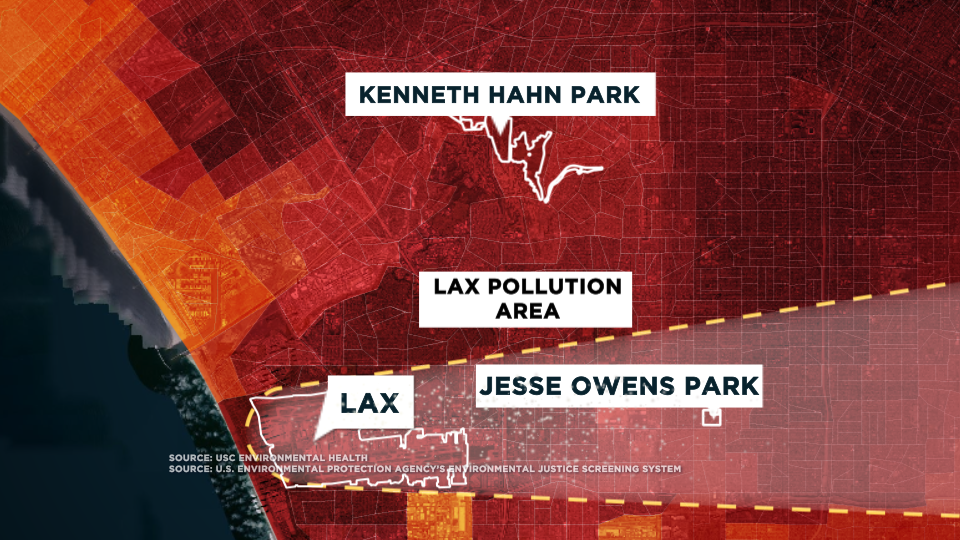 USC researchers had participants with asthma walk around two different parks, one impacted by airport pollution, the other, not. Then, they compared each person to themselves.

According to Habre, this was one of the first studies to see health effects directly related to airport-linked ultrafine particles, but there is still more to study.

"What we'd love to be able to do is follow up on these findings, with basically more chronic long-term types of studies to look at a different set of outcomes in the people that are most chronically exposed to these plumes," Habre said.

She added that communities that always live downwind of the airport "have a lot of other stressors and issues going on" and are "already at higher risk of a lot of different environmental pollutants."

In June, SEIU-USWW released a report detailing its concerns about LAX's proposed Airfield and Terminal Modernization Project, which aims to improve airfields and roadways in addition to adding another terminal and concourse.

The report is titled, "Turbulence Ahead: What LAX's Expansion Means for the City of Los Angeles' Legacy on Racial Equity & Environmental Justice."

The airport's initial stance was that the project wouldn't have a direct impact on increased pollution from more flights long term. Projections in the Draft Environmental Impact Report only went until 2028, because the "future increases in passenger activity levels at LAX will occur with or without the proposed Project."

The union disagreed and voiced their concerns about the effects on workers and neighboring communities both in its report and in comments published in the airport's Final Environmental Impact Report.

"To be able to have a real conversation about, you know, what can be done to deal with the increased pollution is really hard when you're starting from a point of view of the airport saying that it's not even related to this project." Martin said.

The project has received pushback from other community leaders as well.

Representative Maxine Waters represents California District 43, which is made up of areas east of LAX as well as areas to the southeast. In September, she sent a letter to the Board of Airport Commissioners expressing concern for her constituents living and working near the airport.

Waters wrote, in part, "An increase in LAX capacity of this magnitude would facilitate a significant increase in the number of planes being accommodated by LAX and a corresponding increase in landings and departures, harmful emissions, traffic congestion, and noise for my constituents and all who live and work in the surrounding communities. While I support efforts to enhance airfield and terminal safety and improve the passenger experience at LAX, I continue to oppose any attempt to expand the capacity of the airport."

The project passed earlier this month, but Martin said they are in talks to address concerns before the city council hears an appeal on the Environmental Impact Report.

"They said that they're willing to look at what more could be done in their sustainability plan to look at air quality," Martin said.

LAX was unable to accommodate an interview, but a spokesperson wrote in a statement that the airport doesn't have the authority to regulate airlines.

According to the statement, LAX has adopted an air quality program that includes a commitment to carbon neutrality by 2045 and a sustainability action plan.

The commitment to reducing emissions, "will be extended through the proposed LAX Airfield and Terminal Modernization Project, which will prepare LAX to meet future anticipated growth in aircraft activity and passenger levels," the statement continued.

Airport officials said they could not speak to the ultrafine particle exposure studies because they were not involved.

They said there are mitigation efforts aimed at reducing emissions from "aspects of the airport's operations that are within LAWA's control."

These efforts include electric power at the gates so airplanes don't have to idle and electric airport buses and fleet sedans, according to the statement.

"All of these efforts are aimed at being a responsible environmental steward and good neighbor," the statement said.

THERE IS NO 'MAGIC ANSWER'

Rima Habre from USC said there are ways to mitigate the health risks from airport pollution in neighboring communities like using cleaner fuel or even rerouting landing paths.

"But it is complicated," Habre said. "And it has to do with sort of legal issues and, you know, laws and kind of logistics of how to do that."

According to Habre, there is no "magic answer."

"You cannot move the whole airport. And the airport design itself and the runways have to do with the local areas and the wind directions in that area," she said.

"Designing, maybe, noise barriers and some pollution mitigation factors. But also, you know, providing health services, providing other important investments that might help this local community and not be so burdened by these impacts," she said.

Jane Martin from SEIU-USWW echoed that sentiment, saying the city should be monitoring and evaluating the health impacts on the Black and brown communities near the airport and on those who work there.

For airport worker Jovan Houston, increasing healthcare access to deal with the effects of airport pollution is important.