Hundreds of workers march near LAX, calling on elected officials to support unionization 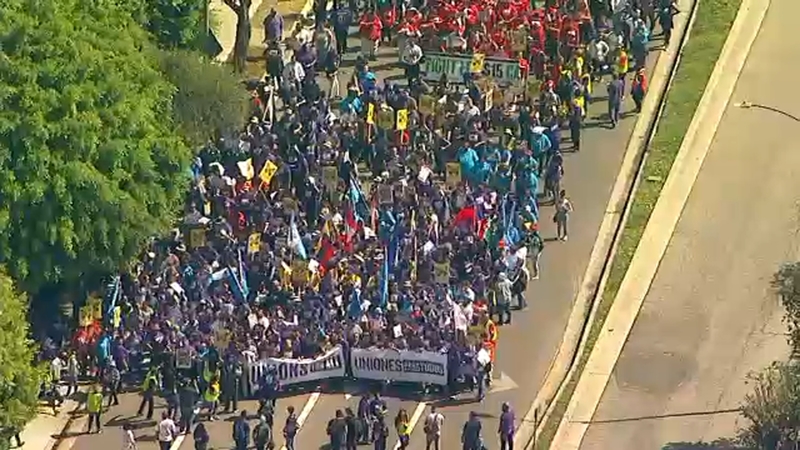 Airport employees and rideshare drivers started the march around 11 a.m., supporting the "Unions for All" movement.

California Sen. Kamala Harris spoke to the crowd about the importance of labor unions and what it means for the citizens of Los Angeles.

"Unions represent mothers and fathers who are working a very long day at work, and they deserve to be able to have fair working conditions, a safe work place, livable wages, and it is the unions that have the power and ability to bargain for them, so they have dignity and that people recognize the dignity of work," Harris said.

Los Angeles World Airports officials said the demonstration is not expected to affect any flight operations. LAX is advising travelers to allow extra time to reach the Central Terminal Area, and asks visitors to use the lower/arrivals level. Two lanes of westbound Century Boulevard were closed between Airport and Sepulveda boulevards. Motorists were advised to use alternate routes, such as Sepulveda Boulevard and Westchester Parkway.

Additional traffic officers and Airport Police officers were on hand, airport officials said. The march is expected to last until about 1 p.m.

Demonstrators are pushing elected officials to support unionization at companies such as Southwest, American Airlines, United, Uber and Lyft.

Marching began at the intersection of Century Boulevard and Avion Drive and is expected to go through LAX, with demonstrators possibly making their way into one or more terminals such as Terminal 1.

LAX was picked as the location of the march due to it being a major economic hub where large corporations employ workers struggling to afford a living, organizers said.

The demonstration comes one day ahead of the start of the Unions for All Summit, where leaders from Service Employees International Union and the Fight for $15 movement will hear from 2020 Democratic presidential candidates speak on labor issues in L.A.