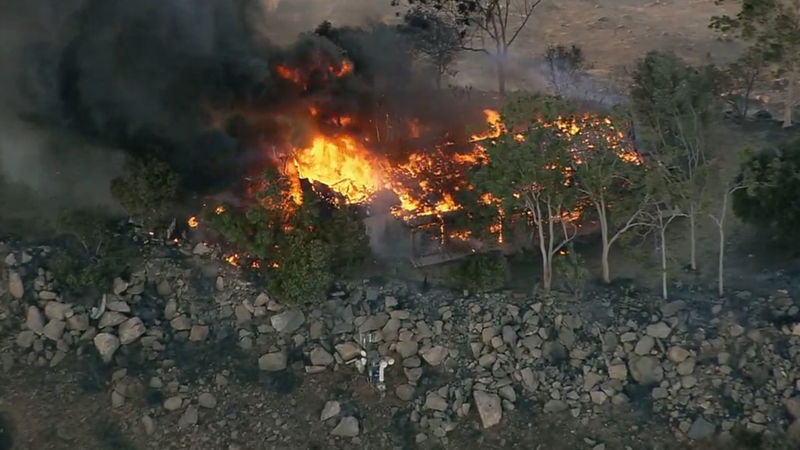 MURRIETA, Calif. (KABC) -- A brush fire that broke out in an unincorporated area of Murrieta in Riverside County Thursday charred 300 acres and destroyed at least one home, Cal Fire officials said.

A home situated on a ridge could be seen burning from the air. The blaze was 10 percent contained by Thursday evening, officials said.

Witnesses near the scene said they could hear the sound of propane tanks exploding at residences in the distance.

One woman, Lauren Fuga, said she watched her own home burn right before her eyes.

"I just, I'm at a loss for words," she said through tears. "It's so horrible. You never think that it's going to happen to you, and it can. My house on fire. My house is on fire."

Toward the evening hours, Fuga learned that her home only had back end damage, but when she was watching it she said all she could see were flames everywhere.

The blaze, dubbed the Liberty Fire, was reported around 1:14 p.m. near Los Alamos Road and Liberty Road and was initially sized up at 20 acres, according to fire officials.

As a precaution, all 20 campuses within the Murrieta Valley Unified School District will be closed Friday, and all school events and activities will be canceled.

Evacuation orders were in place for all roads south of Los Alamos Road, east of Ruth Ellen Way and west of Briggs Road and the following streets:

A care and reception center has been established at Great Oak High School at 32555 Deer Hollow Way in Temecula and at Mesa High School at 24801 Monroe Street Murrieta, CalFire Riverside officials said.

An animal evacuation center (large and small) is available at San Jacinto Valley Animal Campus at 581 S. Grand Avenue in San Jacinto, and Animal Friends of the Valley at 33751 Mission Trail in Wildomar (small only.)

Murrieta Equestrian Center was also available for horses, as long as they stayed in trailers because the corrals are full. The center is located at 42670 Juniper St.

Cal Fire Riverside officials said the blaze was burning at a moderate to rapid rate of spread in heavy fuels amid 20 to 30 mph winds.

Hundreds of firefighters were battling the blaze on the ground and with aerial units.