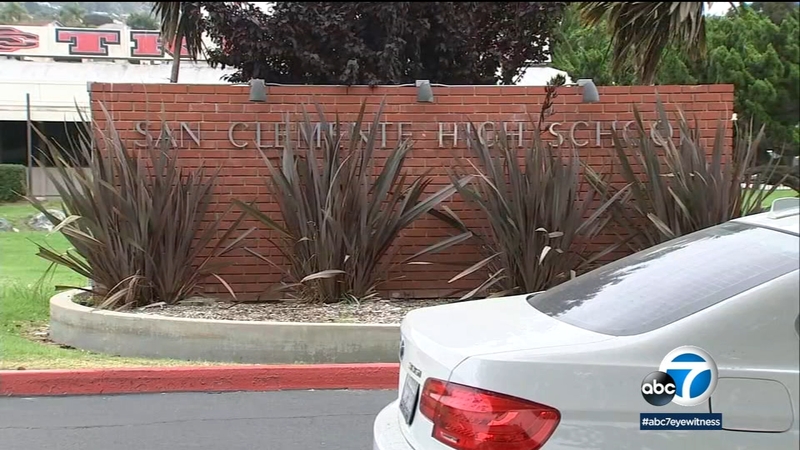 SAN CLEMENTE, Calif. (KABC) -- An investigation has confirmed students were subjected to a racist taunt and other verbal abuse during a high school football game in Orange County.

San Clemente High officials say a racial slur was directed at a student from visiting Lincoln High of San Diego on Sept. 13. The slur was made inside a restroom. The school's investigation also found offensive comments were made in the San Clemente stands toward visiting fans and students.

The San Clemente cheerleading squad left early because of the comments, according to the San Diego Union-Tribune.

"Cheerleaders who went to the restroom were called dogs, were asked where are their leashes and told that they would be 'dog walked,'" Aeiramique Glass-Blake - executive director of Generation Justice, a youth-led activism and organizing group - said at a press conference outside of the O.C. school last week.

"I think we really need to acknowledge where this comes from," Blake added. "The fact that parents and adults egged their children on to continue with this hate rhetoric, the fact that adults were right there saying the same thing, the fact that sheriff's were asked to intervene. They were only on the Lincoln side, the majority of the sheriff's and security were on Lincoln's side, but Lincoln was not protected by them."

Several activists held a press conference Monday morning outside San Clemente High, where they claim multiple people - including students and adults - heckled Lincoln players and the cheer squad during the game.

Lincoln's head coach, David Dunn, told the Union-Tribune that players on the field didn't hear any of the comments but said they heard about it at halftime from the drill team and cheerleaders.

"There were taunts from the stands. The girls were told 'they should be on leashes,''' Dunn told the newspaper. "I was upset because it affected the young ladies. These are 14-, 15-year-old girls. There is no place for it. There was a lack of common decency and respect.''

There weren't any racial comments made by San Clemente players or coaches, Dunn told the newspaper.

The letter did not say if any students would be disciplined.

The letter said students from San Clemente and Lincoln will participate in a workshop facilitated by the Anti-Defamation League.

Officials at both schools asked anyone with specific details or cell phone videos or photographs to share that information with the school as officials try to identify individuals who were involved.