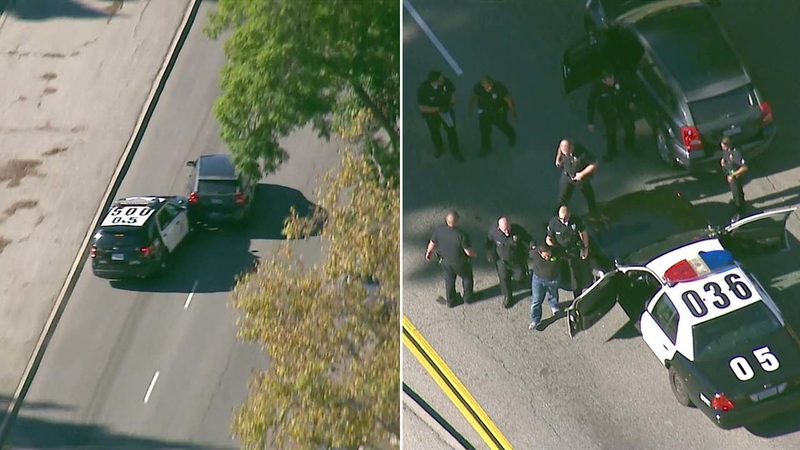 LONG BEACH, Calif. (KABC) -- A suspect wanted for two armed robberies led Los Angeles police officers on a wild chase before being taken into custody in the Long Beach area on Tuesday.

The suspect was wanted for allegedly committing two armed robberies, authorities said. He apparently used a knife during those crimes.

A robbery suspect was fleeing from police at high speeds on various freeways in the Long Beach area of Los Angeles County.

The suspect, who was the lone occupant in the vehicle, sped up the northbound 110 Freeway in the Wilmington area but exited onto surface streets, driving at high speeds to avoid capture.

The suspect also drove on the wrong side of the road, putting other drivers at risk.

After weaving through surface streets, the suspect traveled onto the eastbound 91 Freeway in the Long Beach area, passing the 710 Freeway.

The suspect then exited the freeway and proceeded to drive recklessly on surface streets -- at times even driving on the wrong side of the freeway and running red lights.

A police officer eventually conducted a PIT maneuver, causing the suspect to lose control of the vehicle on Carson Street.

"Those policemen did such a great job. As you know, the next traffic light right there, 50 feet away, is a college and there's a lot of kids out," one witness said.

The suspect was pulled out of the car, tackled to the ground and taken into custody. An eyewitness also captured the take down from inside their car.