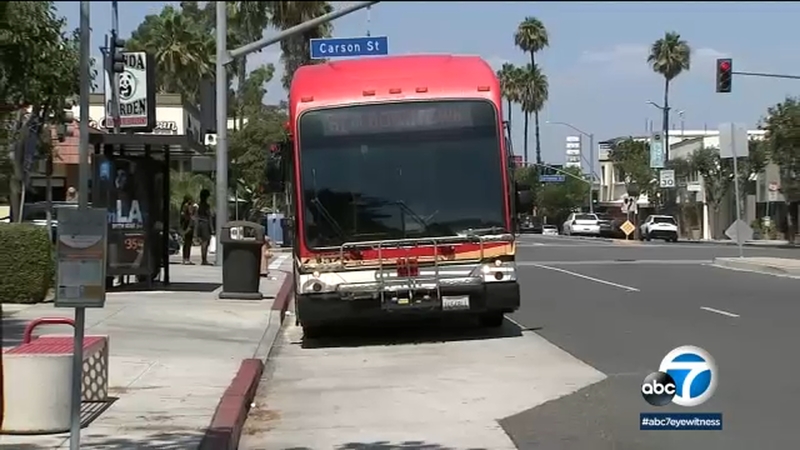 LONG BEACH, Calif. (KABC) -- A father is demanding answers after his 12-year-old was attacked on a Long Beach bus over the weekend while he was on his way to visit his grandmother.

"This guy just started hitting my son in the head like he was on UFC or something," said the boy's father, Billy Brown.

Brown was not on the bus with his son, but he told him what happened: the man picked his son up and threw him on the other side of the bus before he eventually got off. He says this all happened Sunday afternoon on bus number 61 while it was stopped in the area of Atlantic Avenue and Carson Street.

Brown says his son also rides that bus to school every day.

"When my son goes to see his grandma up the street, I don't expect him to be in no type of violence," he said.

A report was filed with the Long Beach Police Department, a spokesperson for which said an investigation is in its preliminary stages and authorities will work with Long Beach Transit to identify the person responsible.

"These were closed fists to the face and to the head. I took pictures of my son's mouth... where (it's) busted on the top and bottom."

Brown says this never should have happened and says he believes no one stepped in to help his son on the bus.

"I don't care what kid that is. Someone has to intervene and I'm upset with the community right now," he added.

We spoke with Brown's son off-camera and he said he's doing better. Meanwhile, Brown says his son will not be getting back on the bus.

"My son is terrified of riding the bus. He doesn't want to get on the bus."

The spokesperson also said there are cameras on buses, and Eyewitness News has submitted a request for footage of the attack.