Boyfriend speaks out after woman, 18, left brain dead in shooting by school officer in Long Beach 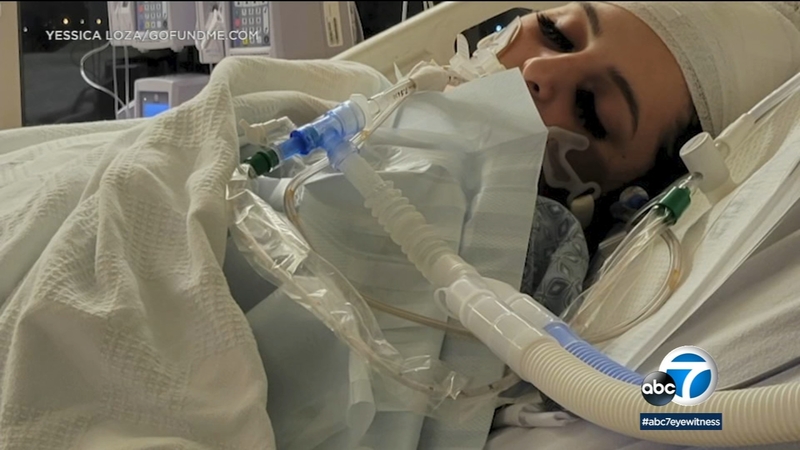 LONG BEACH, Calif. (KABC) -- The boyfriend of an 18-year-old woman who was shot by a school safety officer in Long Beach spoke out at a news conference on Wednesday, demanding answers after the shooting left his girlfriend critically wounded.

The woman, identified by loved ones as Mona Rodriguez, the mother of a 5-month-old son, was shot across the street from Millikan High School on Monday afternoon.

The Long Beach Unified School District said one of its school safety officers responded to investigate an altercation between multiple people at Spring Street and Palo Verde Avenue around 3:13 p.m.

Long Beach police detectives say the preliminary investigation reveals the school safety officer was driving when he observed a physical altercation between two teenage girls in the street. Detectives say a 20-year-old man and a 16-year-old boy also had some type of involvement in the altercation.

Police say when those involved in the skirmish attempted to flee in a car while the officer was next to the vehicle, he opened fire.

A bystander's cellphone video shows that officer firing his gun when a silver sedan, in which Rodriguez was a passenger, sped off. The footage is part of a police investigation.

Rodriguez's boyfriend, Rafeul Chowdhury, and his brother who was in the car said the officer never told them to stop, and fired two shots into the vehicle.

Rodriguez was transported to a hospital, where Chowdhury said she was later declared brain dead. Her family was waiting for other loved ones to arrive at the hospital to say their final goodbyes.

"I don't think my girlfriend deserved this. It was all for no reason," Chowdhury said Wednesday, his voice choked with emotion. He said the officer "never told us anything. All we did was just got in the car. He never told us to stop anytime soon.

"And the way he shot us, it wasn't right," Chowdhury said. "He could've shot my tires. But why straight through the window, through someone's head?

"But all I can say is I just want justice for my girl. My baby momma. The love of my life, that I lost, that I can't get back ever again. I don't even know what to tell my 5-month-old son."

Chowdhury's brother was also in the car when the officer opened fire.

"He's at the back of the car getting the plates and reading it to his walkie-talkie, I've seen that, and then he decides to come to the side of the car where the fender is and screams 'Hey!' when we're leaving and decides to fire two times," Chowdhury's brother said, adding that one of the bullets struck Rodriguez.

The school district said in a statement that no Millikan High School students were injured in the shooting.

The officer has been placed on unpaid administrative leave.

The Los Angeles County District Attorney's Office will also be conducting an independent investigation of the incident.