16-year-old Graviela Estrada says she noticed 3 men following her when one of them pushed her on the ground and attacked her.
KABC
By Jaysha Patel 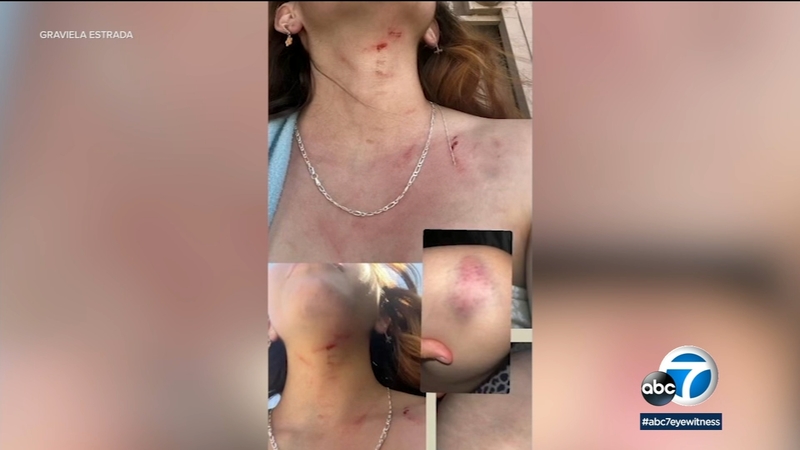 LONG BEACH, Calif. (KABC) -- Our policy is to not show or identify victims of assault, but Estrada wanted to appear on camera to bring awareness to the situation and her mother was present and gave permission to ABC7.

A 16-year-old girl was attacked in broad daylight on Thursday after leaving her school.

The attack happened last Thursday near the 6100 block of Long Beach Boulevard, according to police.

Graviela Estrada says she was walking to get picked up by her mother after school when she was attacked.

"I noticed a black car, tinted windows, was right behind me, and a guy was following me too," Estrada said.

Estrada says she noticed three men following her, but said only one of them attacked her.

"He threw me onto the ground, and I fell pretty hard on my back, and I hit my head. I almost lost consciousness, just a bit, but I managed to stay up," said Estrada. "He was on top of me. I was tossing and turning. I was screaming, and when I was screaming, he was putting his fingers inside my mouth."

Estrada says the man who attacked her managed to undress her, but she finally broke free and ran toward the spot where her mother usually picks her up from school.

Video from neighbors in the area shows the black car Estrada said was following her.

Long Beach police on Tuesday described the suspect vehicle as a 2005 black Toyota Camry with a California license plate 6UIN904.

🚨 WANTED: #LBPD seeks the public's help in locating 3 suspects wanted for physically assaulting & robbing a 16-year-old female victim on 5/12/22 near the 6100 block of Long Beach Boulevard.
See the graphic below for the vehicle and suspect description ⬇️ pic.twitter.com/dUi2YiskXZ

She says she had bruises and scratches on her neck and knee after the attack.

Long Beach police said the investigation is ongoing, and that the suspects fled in the car before officers arrived. One suspect was described by police as about 30 years old, tall with a thin build. LBPD did not have a description of the other two suspects.

Estrada says she never wants to walk from school again.

"It sucks to say this because I lived around here my whole life, walking down here, and now I see this place so differently," she said. "I'm just so afraid."