During a new conference, he painted himself as the victim of a political hit job intended to keep him from being reelected.
KABC
By Rob Hayes 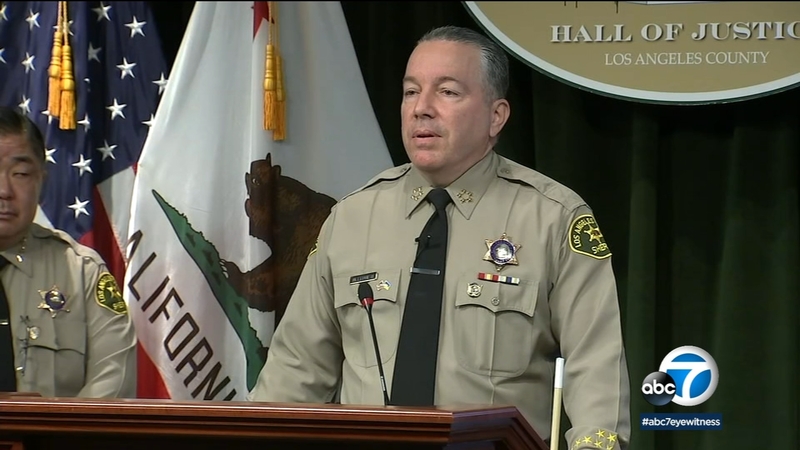 LOS ANGELES (KABC) -- Los Angeles County Sheriff Alex Villanueva labeled the sheriff's commander, who filed a legal complaint against him, a "disgruntled employee" and announced that he has launched an investigation into the Los Angeles Times reporter who uncovered evidence of a possible cover-up involving a deputy's use of force against an inmate.

During a rambling news conference Tuesday morning where Villanueva spoke for nearly a half an hour before taking any questions, the sheriff tried to lay out a timeline of events regarding the initial lack of an investigation into a sheriff's deputy who used force to restrain an inmate after that inmate struck him on March 10, 2021.

"When it comes to cover-ups or whistleblowers, I don't exactly see what was covered up or what whistle was blown," Villanueva said. "That's the mystery."

Surveillance video of the confrontation shows an inmate, Enzo Escalante, throwing punches at a deputy, prompting several other deputies to intervene.

But even though Escalante was restrained in less than a minute, Dep. Douglas Johnson knelt on the inmate's head and neck for roughly three more minutes.

Villanueva said he didn't learn about the incident until November, some eight months later.

However, Commander Allen Castellano said Villanueva not only watched the video of the incident, but buried it because the trial of Derek Chauvin, George Floyd's killer, was going on at the time and Villanueva thought it would make his department look bad.

Attorney Vincent Miller, who is representing Castellano in a civil case against Villanueva, claims the sheriff retaliated against Castellano for keeping the use of force investigation alive.

"He issued a fake internal affairs investigation against [Castellano] and ... gave orders to the investigator to give him a written reprimand," Miller told Eyewitness News.

During his news conference, Villanueva painted himself as the victim of a political hit job intended to keep him from being reelected.

During the news conference, the sheriff also took aim at Alene Tchekmedyian, the L.A. Times reporter who broke the cover-up story in March.

Villanueva included a photo of Tchekmedyian in one of his presentation slides and said his department had launched an investigation into who had leaked the surveillance video of the deputy kneeling on the inmate's neck to her.

When reporters at the news conference asked if Tchekmedyian was under investigation, Villanueva answered, "All parties to the act are subjects of the investigation."

In a tweet posted Tuesday evening, Villanueva elaborated on the subject and said "at no time" did he state Tchekmedyian was a suspect in a criminal investigation.

(1/3) Resulting from the incredible frenzy of misinformation being circulated, I must clarify at no time today did I state an LA Times reporter was a suspect in a criminal investigation. We have no interest in pursuing, nor are we pursuing, criminal charges against any reporters. pic.twitter.com/43Ro4kK8HM

(2/3) We will conduct a thorough investigation regarding the unlawful disclosure of evidence and documentation in an active criminal case.  The multiple active investigations stemming from this incident will be shared and monitored by an outside law enforcement entity.

(3/3) What should be of interest is the fact the LA Times refuses to acknowledge their reporting, and the account of a disgruntled employee, were thoroughly debunked during today’s press conference.