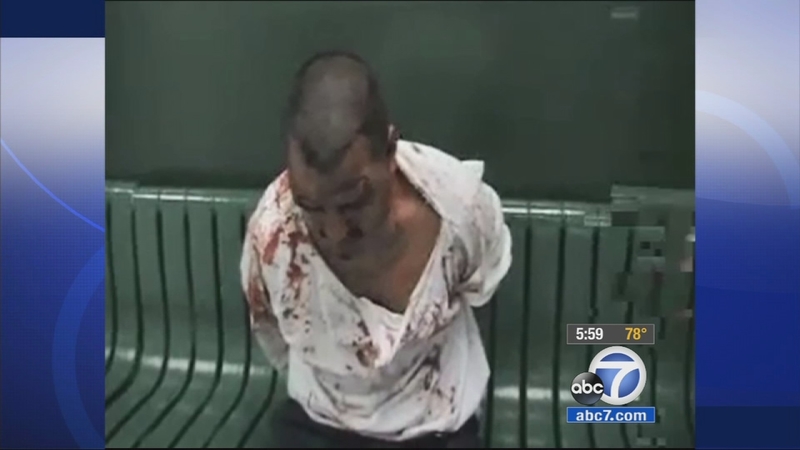 Jurors have learned Gonzalez was a key figure in the incident. Prosecutors say he directed the attack on Carrillo.

Gabriel Carrillo: I have no idea sir.

Sgt. Eric Gonzalez: So you don't know how all this blood and all these cuts got on your face?

It happened February 26, 2011 -- inside the visiting center at Men's Central Jail in Downtown Los Angeles.

Prosecutors allege that Carrillo "mouthed off" to the deputies after bringing a cellphone into the visiting center lobby, a misdemeanor violation of the law.

Carrillo was handcuffed and escorted to a deputy break room.

What happened next was either a brutal beat-down by deputies on a "defenseless and helpless" man or it was a justified and reasonable escalation of force on a resisting suspect.

Lt. Robin Limon: "What did you get hit with Gabriel?"

Gabriel Carrillo: "I couldn't tell you ma'am. I was face down."

Lt. Robin Limon: Like punches? Do you think someone punched you? You've been hit before, right?

Sgt. Eric Gonzalez, Deputy Sussie Ayala and Deputy Fernando Luviano are charged with beating Carrillo up and then lying about it to cover up their actions.

All three defendants have pleaded not guilty. None of the defendants took the witness stand. Their position is that Carrillo was the aggressor - that at one point one hand was freed from the handcuffs so that he could be fingerprinted. The defense says that's when he swung the metal restraint violently, using it as a weapon against the deputies.

In closing arguments Tuesday, federal prosecutor Brandon Fox told jurors there is "clear, consistent and overwhelming" evidence that both of Carrillo's hands were restrained in handcuffs locked behind his back during the altercation with deputies.

Carrillo "mouthed off" to deputies and "made a mistake" by bringing the cellphone into the jail facility, but the "punishment far exceeded his crime," said Fox.

At one point, Fox told the jury, "At least 800 pounds of deputies" was piled onto the still handcuffed and face down Carrillo.

"It was obvious to everyone that this would be a cover-up," said Fox of the defendants.

Prosecutors showed jurors three exhibits they say prove that both of Carrillo's wrists were handcuffed during the altercation: hospital records that indicate injuries to both hands, photographs that show bruises encircling both wrists and that videotaped interview.

Lt. Steve Jauch: Gabriel, this is Lt. Jauch, are you injured?

Gabriello Carrillo: Yes, I am.

Lt. Steve Jauch: Where are you injured?

Gabriel Carrillo: All over my face...

Lt. Steve Jauch: Where else are you injured?

Gabriel Carrillo: My right side...

Lt. Steve Jauch: Your right side...

The defense says this was reasonable force.

"Unfortunately, as we learned, there were no reasonable law enforcement officers at that scene," Fox told jurors.

Photos of Carrillo stood in stark contrast to photos of the deputies' injuries.

Carrillo's face was battered. His two wrists were ringed with bruises. Two deputies displayed a scrape and a finger cut. One had a button missing from his shirt.

Three deputies did seek medical treatment for exposure to Carrillo's blood. But, prosecutors say, that exposure to blood was a direct result of their use of force against Carrillo.

In their closing arguments, defense attorneys painted Carrillo as hostile when he came to the jail that day - that he was anxious to visit his brother who'd been arrested and roughed up in a separate incident a few days prior.

Besides, Avrahamy told the jury, why would Carrillo's "mouthing off" to deputies provoke such a strong and violent reaction when they routinely process up to 1,000 visitors a day -- many of whom are contentious with LASD personnel?

"It does not make sense, because it did not happen," said Avrahamy.

Avrahamy also referred to Gonzalez' radio call for help. Why would a seasoned sergeant summon a group of deputies into the room to witness the crime of unreasonable force?

Ayala defense attorney Patrick Smith reminded jurors that the defendants were sworn officers who took an oath to uphold the law. The visiting center can be a dangerous place, he said, and the force was not only authorized, it was required to protect themselves and fellow deputies.

"It's an unfortunate reality of law enforcement," Smith said of the legitimate force used at times against suspects.

As for that videotaped interview of a bloody Carrillo? Smith noted that Carrillo is alert and coherent in the footage.

While he may have a broken nose, "there was no brain damage," said Smith.

Smith also cast doubt on testimony from two prosecution witnesses - deputies who were originally indicted in this case.

Deputy Pantamitr Zunggeemoge and Deputy Noel Womack took plea deals and testified against their former colleagues at trial. Both changed their stories and now say both of Carrillo's hands were cuffed during the entire incident.

The jury has been instructed by the judge to view Zunggeemoge and Womack's testimony with "greater caution." Smith told jurors they should view it as "suspicious."

In exchange for their testimony, prosecutors will recommend reduced sentences for Zunggeemoge and Womack.

"The system is so skewed, it can't be trusted," said Smith of their testimony in exchange for the plea deals.

Womack, Zunggeemoge, Ayala and Luviano were all relieved of duty without pay by the LASD in January 2014. Gonzalez left the department in May 2013.