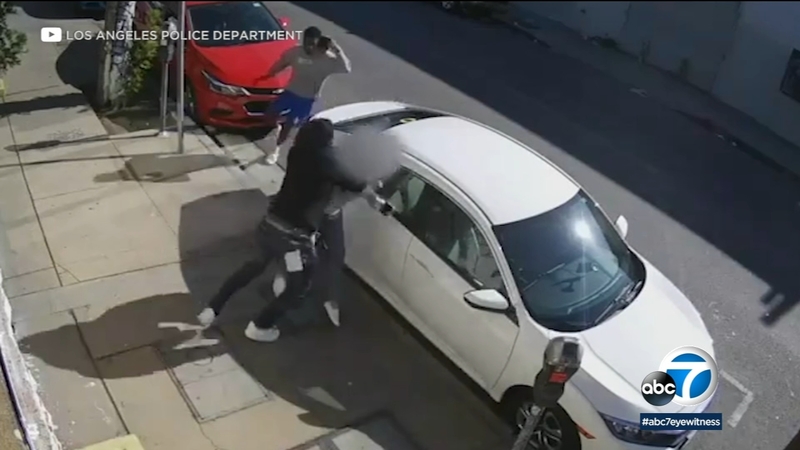 LOS ANGELES (CNS) -- A 25-year-old man was behind bars Friday in connection with a follow-home robbery in Los Angeles, and authorities sought the public's help to identify three additional suspects.

The victim was in the 9000 block of Lincoln Boulevard, near Westchester Park, on Oct. 29 when he noticed a white Maserati Ghibli following him, according to the Los Angeles Police Department.

Three suspects exited the Maserati once the victim reached the 1100 block of East Pico Boulevard. The victim attempted to run from the suspects, but he was pushed to the ground, and one of the men pointed a gun at his head, demanding he remove his watch.

During the robbery, a fourth man stole property from the victim's car, according to the LAPD. The suspects fled the scene with two watches, a laptop and an iPad, all estimated to have a total value of $604,000

Investigators later identified Cheyenne Hale as one of the suspects, and he was arrested on Wednesday. Authorities recovered a handgun from Hale during his arrest, and later recovered seven additional handguns, a large quantity of drugs and $21,000 after searching Hale's residence.

Hale was released from custody after posting bond and is scheduled to appear in Los Angeles County Superior Court on Aug. 4.

The three other suspects in the robbery remain outstanding.

The first suspect armed with the gun was described as a Black man in his mid-20s who stands about 5 feet 8 inches tall and weighs about 160 pounds, with black hair and brown eyes. He was last seen wearing a gray hooded sweatshirt.

The second suspect was described as a Black man in his mid-20s who stands about 5 feet 6 inches tall and weighs about 200 pounds, with black hair and brown eyes. He was last seen wearing a black hooded sweatshirt, black pants and white shoes.

The third suspect was described as a Black man who stands about 5 feet 10 inches tall and weighs about 200 pounds. He was last seen wearing a black hooded sweater, black pants and black shoes.

Anyone with information on the robbery was asked to contact LAPD Detective Alonzo and Detective Mrakich at (213) 486-6840. Calls made during non-business hours or on weekends can be directed to (877) 527-3247.