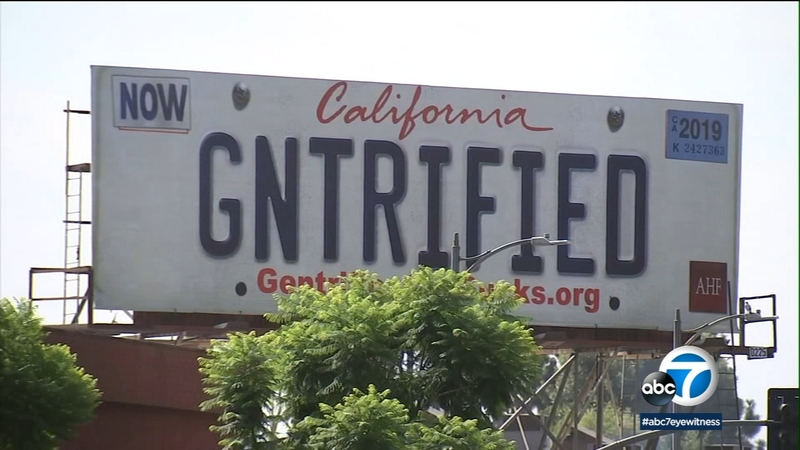 LOS ANGELES (KABC) -- You may have seen them while driving around: new billboards that look like a license plate.

They're meant to be a direct, shaming message about the housing crisis in Los Angeles.

The billboards are an image of a California license plate with a shortened version of the word "gentrified."

The message is that new housing and gentrification is making the homeless epidemic worse. The AIDS Healthcare Foundation is putting up these billboards.

"What's happening is new construction that is being built is luxury construction," said Ged Kenslea of the AIDS Healthcare Foundation. "It is not solving the homelessness crisis that we are having here in L.A."

The group claims luxury housing developments are eliminating existing low-income housing. The law says there needs to be a certain number of affordable housing units in each new project, but developers get around that. He says a new building in Hollywood will have 200 new apartments.

"That property is going to have only 10 affordable units," Kenslea said. "The developer has paid an in- lieu fee to build apartments elsewhere."

He adds those affordable apartments are built in less desirable areas.

"So in essence what we are having is the ghettoization of low-income people," he said.

Los Angeles Mayor Eric Garcetti took part in the grand opening of a Bridge Home site Monday, which will house about 100 homeless people.

He says 80% of new construction projects have affordable units in the same building, but he agrees that gentrification is a concern.