Staples Center: Lakers, Clippers fans not expected to be allowed at arena during 2020-21 season 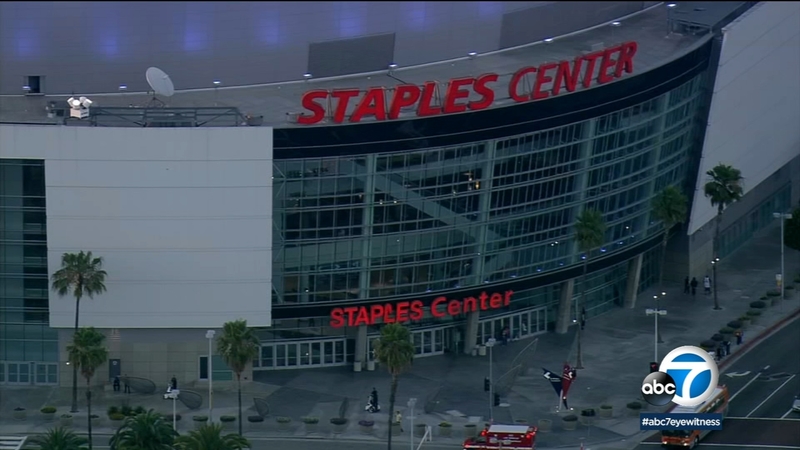 No fans at Staples Center for upcoming season, Lakers say

LOS ANGELES (KABC) -- With the coronavirus pandemic continuing to prevent large gatherings, Laker games during the 2020-2021 season will be held without fans Staples Center "until further notice," the team announced Wednesday.

The decision was made in accordance with guidance of state and local health officials, officials said.

"The health and safety of our fans, players, staff and community are our main priority and we will continue to work with state and local officials to come up with a plan to safely welcome fans back to STAPLES Center in adherence with local, State, and NBA guidelines," the Lakers said in a statement. "We appreciate your continued support and look forward to coming together, when it is safe to do so, to celebrate the raising of our banner and the quest for another NBA championship."

The Clippers have not made a formal announcement about the matter, but fans are also not expected to be allowed at that team's games.

While the 2020-21 game schedule will be detailed at a later date, the NBA announced that season will tip off on Dec 22.

The Lakers have officially announced that any public celebration of their 17th championship will have to wait because of the coronavirus pandemic.

That gives teams, particularly those like the Lakers who played late into the postseason, a relatively short offseason to make roster moves, go through the draft next week and prepare for the upcoming season.

The Lakers won the NBA Finals on Oct. 11 in the league's bubble at Walt Disney World in Florida, finishing off the Miami Heat in six games. Los Angeles spent three full months in the bubble, leaving just four weeks ago.

When the free-agent signing period begins next week, the Lakers are widely expected to re-sign Anthony Davis for a second season alongside NBA Finals MVP LeBron James. L.A. faces several tougher roster decisions this month, including whether to retain Dwight Howard, Kentavious Caldwell-Pope and Markieff Morris.