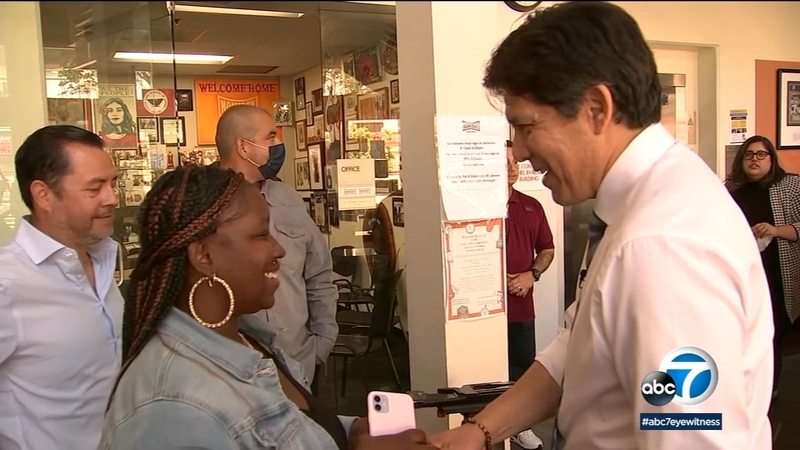 LOS ANGELES (KABC) -- The final campaign push is on with just hours to go before the California primary election, and in Los Angeles, the top candidates for L.A. mayor are out and about, meeting with undecided voters.

Tuesday is the final day of voting in the mayor's race, and a new poll shows that a run-off is likely between Rick Caruso and Congresswoman Karen Bass.

The new L.A. Times, Berkeley Institute of Governmental Studies poll has Bass at 38%, developer Rick Caruso at 32% and Councilman Kevin de Leon at 6%.

The rest, 15% of voters, are still undecided according to the poll.

Bass is seeing strong support among women voters in the poll, but so far, turnout is low, so it's unclear how accurate this poll is.

The congresswoman has been outspent by Caruso by millions and millions of dollars. Bass's campaign tells Eyewitness News that they've spent at least $3 million dollars so far on the race.

Caruso has spent $40 million, according to the Cal-Access 24-hour filings. That's the most money ever spent on the L.A. mayor's race, and that's before even reaching the primary.

Caruso has continued to call Bass an ineffective leader

"You know, it's a poll. Let's get the 15% decided. I think that's what's important. No matter how it ends up, I started at 6% so we've had an enormous amount of growth," Caruso said. "The goal is to get into the primary and it looks like I'm going to be in the primary so we will declare victory tomorrow night if that happens."

"It's interesting that he's focused on me which I guess that means he considers me a bit of a threat, but I think that people know me. I've been around this city for a long time. They know the sincerity of my work," Bass said. "I think at the end of the day, those kind of tactics can backfire, especially when you're running a traditionally republican style race and claiming to be a democrat."

The candidates vying to become the next L.A. mayor are making a final appeal to voters as campaigning comes down to the wire ahead of Tuesday's primary election.

Meanwhile in downtown Los Angeles Monday, Councilman Kevin de Leon, who is in third place in the L.A. Times/Berkeley IGS poll at 6%, campaigned at Homeboy Industries' Homegirl Cafe in his effort to get out the vote.

"We're not going to take any assumptions. We're not going to let folks try to buy this election with their vast amount of wealth," de Leon said. "I'm a single child of an immigrant mother with a 3rd-grade education. Nothing has ever come easy for me."

De Leon believes the majority of Latino voters are waiting till the end of the race to vote.

Caruso, Bass, and de Leon will all vote tomorrow on primary day.

People who missed the registration deadline can still register at any L.A. County vote center through June 7. Once registered, voters will be given a Conditional Voter Registration ballot to vote.

The ballot will be counted once it is verified. A map of vote center locations can be found here.