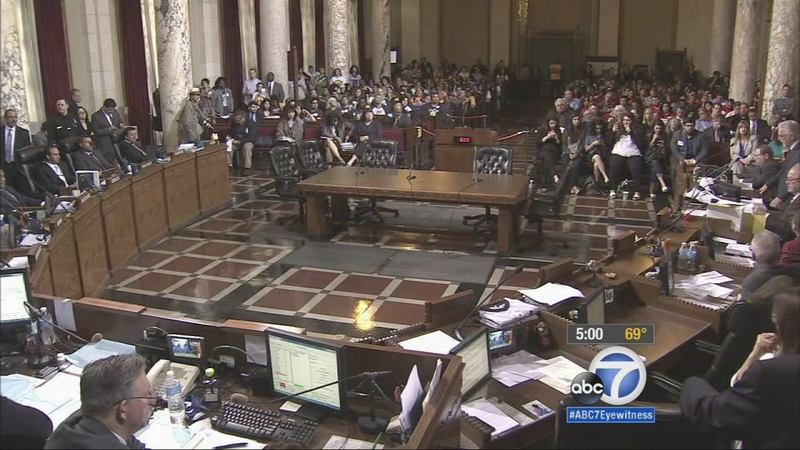 LOS ANGELES (KABC) -- The Los Angeles City Council on Wednesday tentatively approved a measure to raise the minimum wage to $15 an hour.

The City Council voted 13-1 in favor of an ordinance to raise the minimum wage. Because the vote was not unanimous, the measure will return to the City Council for a final vote next Wednesday.

Mayor Eric Garcetti, who has made it clear that he would sign the measure if it passes, released the following statement following the vote.

The City Council gave its tentative support to move forward with the measure in a May vote.

The current minimum wage in California is $9 an hour. The proposal raises it to $10.50 an hour by next July for businesses with 26 or more employees.

Once the wage reaches $15 per hour for both small and large employers, the measure calls for the minimum wage in 2022 to continue increasing based on the cost of living.

Union members and others who are in favor of increasing the minimum wage rallied on the steps of City Hall on Wednesday. They said the cost of living in Los Angeles makes it impossible for people to survive.

On the other side of that argument, many small business owners say they're going to have to raise prices if the minimum wage increases.

Ruben Gonzalez with the Los Angeles Area Chamber of Commerce says many business, over time, will leave Los Angeles if the ordinance passes.