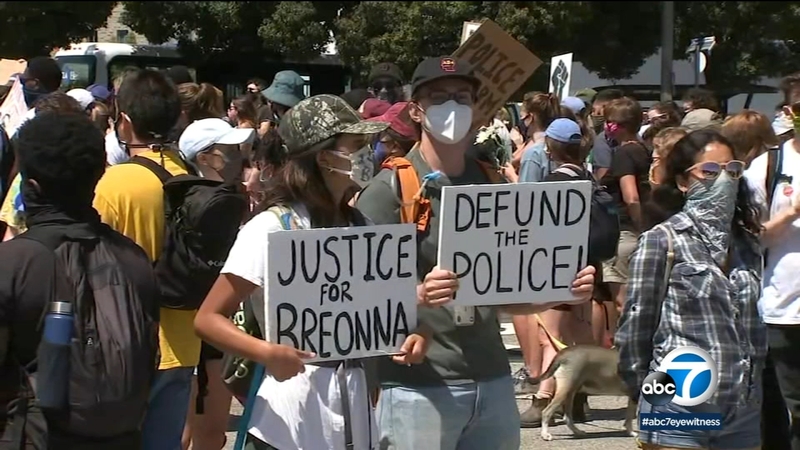 The Community Safety Partnership bureau is an expansion of an existing program that aims to improves relationships between the department and local neighborhoods.

The current Community Safety Partnership program, which started in 2011, is a collaboration between the LAPD and the city's housing authority. It is aimed at having officers help address quality-of-life issues and develop programs to reduce violent crime.

WATCH: Everything you need to know about LAPD's plans for new bureau focused on community safety
EMBED More News Videos

"This is a product of trust and cooperation," Garcetti said. "A result of community and partnership and personal relationships."

The bureau is expected to have a mix of sworn and civilian leadership.

LAPD Capt. Emada Tingirides, who led the partnership program, will become deputy chief overseeing the new bureau. A civilian commander will be named to oversee a regional advisory council that will include leaders from the community, as well as City Council offices and community organizations.

The department says the bureau is meant to represent a shift in mindset from the "warrior mentality" to a "guardian mentality."

Tingirides said in the existing program, one of the keys was not to use the word police in the title.

"This isn't an LAPD program. This is a community program," she said. "This is about understanding the cultures of the communities and adjusting how we work and respond to conflict within communities. It's about getting certain training for the officers, like gang intervention."

The mayor's announcement comes as protests are held in Los Angeles and nationwide calling for criminal justice reform. Some activist groups are also calling for "defunding" police - or reallocating funds from law enforcement agencies into underserved communities.

Some have also called for shifting more police services to unarmed civilians, rather than armed, sworn officers.

The Los Angeles County Board of Supervisors is among agencies giving serious consideration to some defunding of law enforcement. The board recently voted to move forward with a measure to shift funds from the Sheriff's Department to community investment and alternatives to incarceration. Sheriff Alex Villanueva warned it would result in streets that "look like a scene from Mad Max."

The move is also coming as Los Angeles deals with a spike in violent crime, particularly shootings and homicides.
The L.A. City Council recently approved a $150 million cut to the LAPD's budget for the next fiscal year, a move that followed activists' mounting calls to "defund the police."

The Los Angeles City Council approved a $150 million cut to the LAPD'sa budget for the next fiscal year, a move that followed activists' mounting calls to "defund the police."