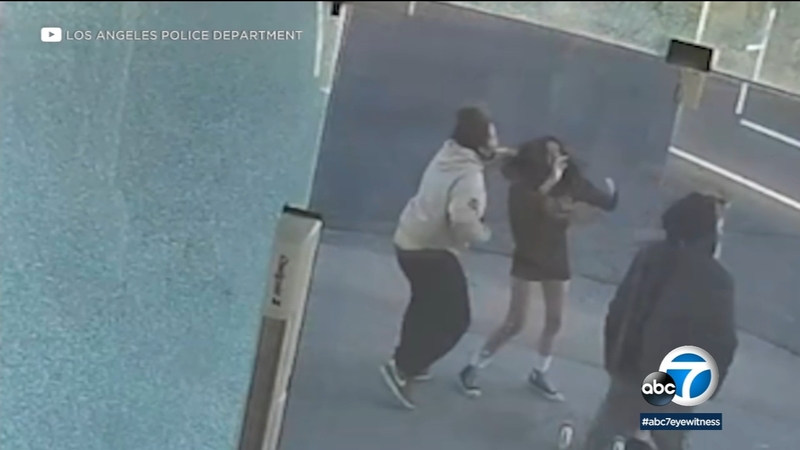 LOS ANGELES (KABC) -- Los Angeles police are searching for four suspects after two teenage sisters were attacked and robbed while on their way to school Wednesday morning.

The victims were walking in the 7200 block of Melrose Avenue about 7:20 a.m. when they were approached from behind by two women who struck them and pulled them to the ground by their hair, according to LAPD.

"The suspects demanded that they hand over their cellphones, then held them by their hair until they unlocked the access codes to the phones," the department said in a statement Thursday.

Police say a black Kia sedan pulled up along Melrose in front of an Urban Outfitters store, and video released shows one of the victims get her hair pulled by a suspect.

At the time, the sisters - ages 16 and 18 - were on their way to class at Fairfax High School.

LAPD Lt. Daniel Gonzalez said an hour after the teen girls were robbed, another student on his way to Los Angeles High School was robbed of his cellphone by the same suspects, who used the same getaway car.

Detectives say they're sure the same four suspects are responsible for the Melrose robbery and the robbery near Los Angeles High School on Olympic Boulevard.

In the Melrose incident, one of the girls was punched in the face and her hair was ripped out by one of the female suspects.

LAPD says in addition to setting up Find My iPhone, the department encourages everyone to update their iPhones with the latest software, which allows the phone to be tracked even if it's off.

"It's terrible. I see young kids walk down the street every single day. I live around here. No one wants to think that something awful is going to happen to you," said Lisa Littleton, who lives near Melrose Avenue in the Fairfax District.

Detectives say the key to catching iPhone robbers is acting quickly because once the phone runs out of battery, there's no way to know where it is unless the suspects decide to charge the phones.

One suspect was described as an 18-year-old woman who was last seen wearing a gray sweatshirt and blue jeans.

The other three suspects were only described as one woman and two men.

Anyone with information on the robbery was asked to call Wilshire Community Police Station Robbery Detective Flores at 213-922-8217. Calls made during non-business hours or on weekends can be directed to 877-527-3247.