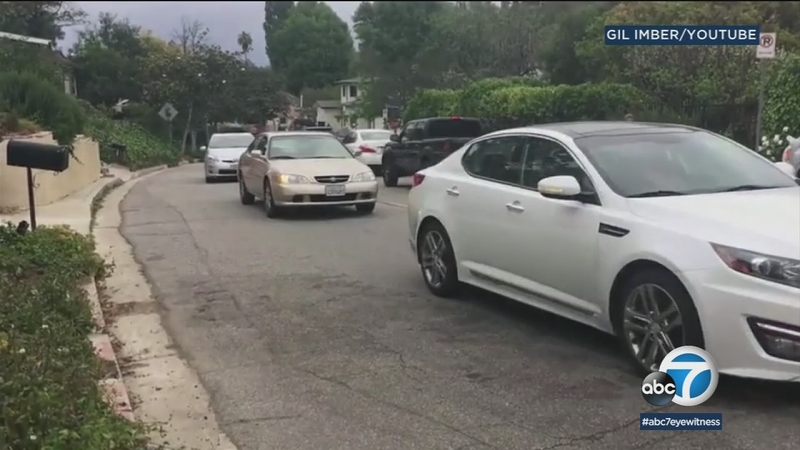 SHERMAN OAKS, LOS ANGELES (KABC) -- Los Angeles is known for its traffic, but with the advent of real time traffic apps such as Waze, neighborhood streets suddenly become as congested as the 405 Freeway.

Residents in one neighborhood in Sherman Oaks are at their wits end. They said tiny Saugus Avenue gets congested on a daily basis.

"We need help. We can't even get down the hill. One of my neighbors had a medical emergency and it was so backed up, they couldn't move for 20 minutes when it's normally a 1-minute drive to the end of the street," resident Tom Materna said.

They said their councilman, David Ryu, worked with the Department of Transportation to install no-turn signs to try and stem the flow of cars. But the signs are ignored as are barricades that were set up Thursday after the city repaved the roadway.

"They come and repair it. The road that the commuters need to drive on and the commuters bash down the barricades and drive through the repair job, destroying it," Materna said.

Residents would like to see the map apps stop sending commuters to side streets, which is something that's become a serious problem within the last year.

"The day of the Skirball Fire, when apps were telling commuters to go through straight, essentially, into the fire through our neighborhood, while conversely we had residents being evacuated from the fire area. That congestion was like nothing I'd ever seen before," resident Gil Imber said.

Eyewitness News met with one resident who felt if there is a faster route, drivers should be allowed to take it and puts blame on the traffic elsewhere.

"It's just out of control and it can be attributed not to the Waze app, but to the politicians not caring about the amount of people being compressed into the area," Michael Maize said.

After the fire several city councilman tried to propose that Waze and similar traffic apps to stop routing vehicles through the neighborhoods.