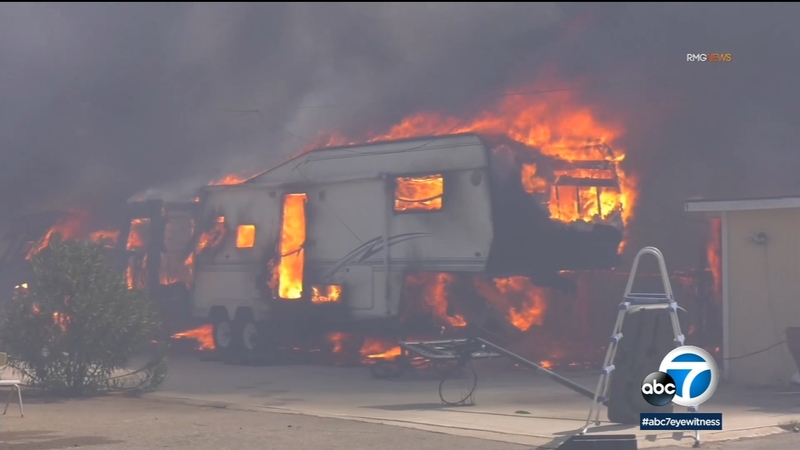 LOS ANGELES (KABC) -- Some homes survive wildfires. Some don't. The ones in lower-income areas are more vulnerable to destruction.

Structures were twice as likely to be destroyed by wildfire where the median annual income was less than $50,000 a year, according to an ABC7 analysis of 85 California fires between 2013 and 2018.

Single-family homes are the most likely to be affected, followed by infrastructure and utility buildings and then mobile homes. This held true no matter the income level.

"We have looked at 40,000 homes that were subjected to wildfires," said Dr. Jon Keeley, a fire research scientist at the U.S. Geological Survey stationed in Sequoia National Park. "Some of them burned, some of them didn't."

The reason researchers like Keeley have found that these structures were lost lies in the construction of the buildings.

"Homes aren't generally burned by the fire front moving right up to the house, but rather from embers that are sometimes blown a half mile away," said Keeley.

Lower-income areas may have homes and structures that are older.

According to Keeley, older structures are less likely to have structural characteristics that protect them from fire destruction.

"Homes after 2008 are generally considered to be more likely to survive a fire," said Keeley.

One of these structural characteristics is the construction of the eaves on the roof, or the rafters that stick out front the edge of the house. Keeley said it's one of the "more critical differences."

"If the eaves are open, the vents that allow air into the attic are essentially placed perpendicular to the ground, and in other words they face directly towards the air flow, the ember path," he said.

But decreasing the size of the mesh that covers those vents can help, Keeley said. Especially those leading to the attic, where debris and dry insulation is easily ignited.

"Most homes burn from embers that get into the attic and ignite the house," he said.

Another change people can make to protect their homes from wildfire destruction is having double-paned windows, as they are less likely to break and allow embers through. Also, metal fences are better than wood fences going up to homes.

But Keeley points out, "the more changes we come up with, the more cost is added on to the house." Vent mesh is the simplest change one can make to a home to increase fire resistance, he said. Changing eave structure could require a lot more construction.

And as more people move into rural areas, "we need to give a lot more thought to how we plan communities and how can we reduce the possibly that people are going to be put into dangerous situations," Keeley said.

INTERACTIVE MAP: Below is a map of 85 fires analyzed by ABC7. The darker the fire perimeter, the more structures were destroyed per 1,000 acres burned.