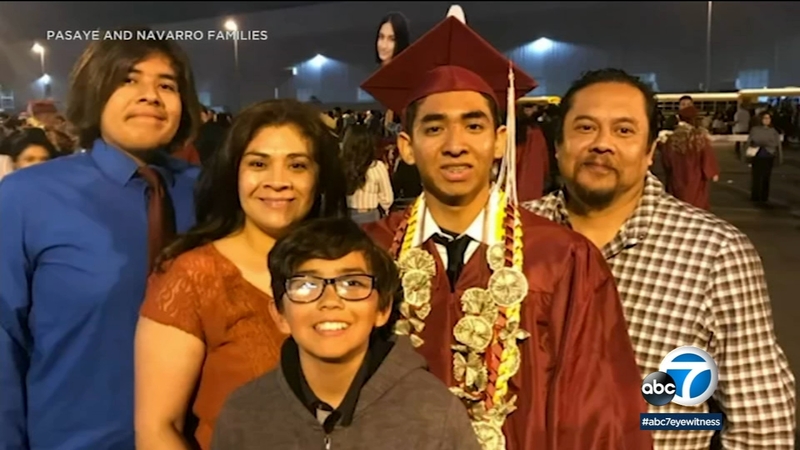 LYNWOOD, Calif. (KABC) -- Three brothers are reeling from a second family tragedy in less than a year after a speeding car plowed into their mother's truck in Lynwood killing her.

It happened just months after their father died from a chronic illness.

Lorraine Navarro was killed Saturday night when a speeding car rammed into her truck near Euclid Avenue and Santa Fe Avenue in Lynwood. Family members say she was killed while driving home alone from a boy scout dinner.

This grief-stricken blow overwhelmed the three brothers who were still trying to comprehend the death of their father, Albert Pasaye, who they say died from a chronic illness.

"Just thinking my dad had passed away, you know, 5 months ago, and then just hearing the phone call it was just really overwhelming...A lot of tears," said Michael Pasaye.

Pasaye says he wishes he had an opportunity to speak to his mother one last time.

"I love her course, and that I appreciate all she's done for me and that I hope that she knows that, you know, we're gonna be strong and go forth and, and do the things that she taught us to, and not give up," said Pasaye. "And even though she's gone, to not worry, to rest, and to know that like, there's people that will always be looking out for us."

Pasaye hopes he does not have to drop out of college to care of his younger brothers and that he's concerned about how he'll handle college expenses for himself and his brothers without his parents support. A GoFundMe account has been set up to help and has already raised over $16,000 dollars since the tragedy.