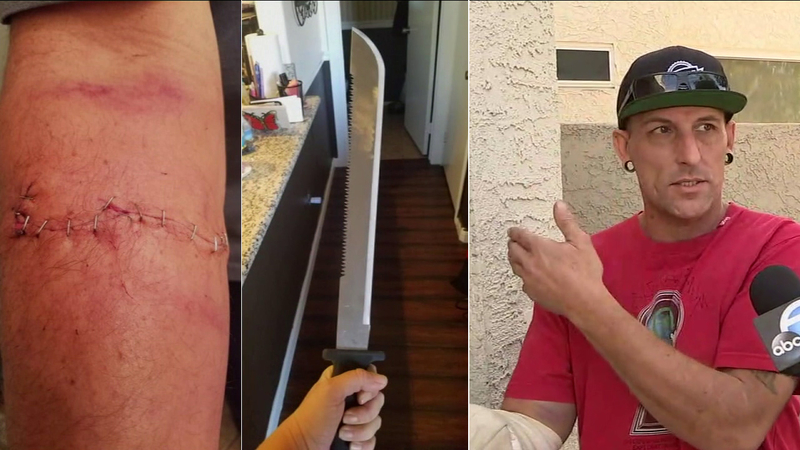 CHINO HILLS, Calif. (KABC) -- A Chino Hills man suffered a six-inch gash to his forearm at the hands of a man wielding a machete early Tuesday in front of his own home.

"He struck me... and chased me pretty much back here to these steps," Doug Goshen recalled. "I ran in my door here for my life."

Goshen said he was awakened by the sound of the burglar alarm on his truck, which was parked in front of his condominium. He went outside to investigate.

"I ran down this path... went around the corner, and caught him in my vehicle," said Goshen, who said he yelled at the burglar and kicked him. "I was in socks and underwear so it wasn't that effective. (Then) he hits me in my arm which I thought it was a bat because of a silver flash."

But it was no baseball bat.

He said because he was a good three feet away from the burglar, it had to be a machete.

"I immediately looked down and my arm was already spraying blood."

Goshen said the suspect got into a vehicle driven by someone else and disappeared down the street. His fiancée called 911 and paramedics rushed to the scene.

He said he lost so much blood, the paramedics had to give him a transfusion on the way to the hospital. Pictures posted on Facebook show a bloody scene inside their condominium, where Goshen had run for safety.

Goshen said the crime scene unit took quite some time to clean up all the blood.
"They said it was more blood than they've seen at most murder scenes," said Goshen. "I guess because (it) hit an artery."

The San Bernardino County Sheriff's Department is investigating the attack and is reviewing surveillance video picked up by cameras placed throughout the area.

"Judging by the photos I've observed, it does look pretty brutal," said Sgt. Eno Lassiter of the Chino Hills station.

Goshen said there have been multiple burglaries in the area. He said his truck was broken into six months prior to this incident; he thinks possibly by the same burglar.