The dancer has been sharing updates on his Instagram on what he saw on his way out of the war-torn country.
KABC 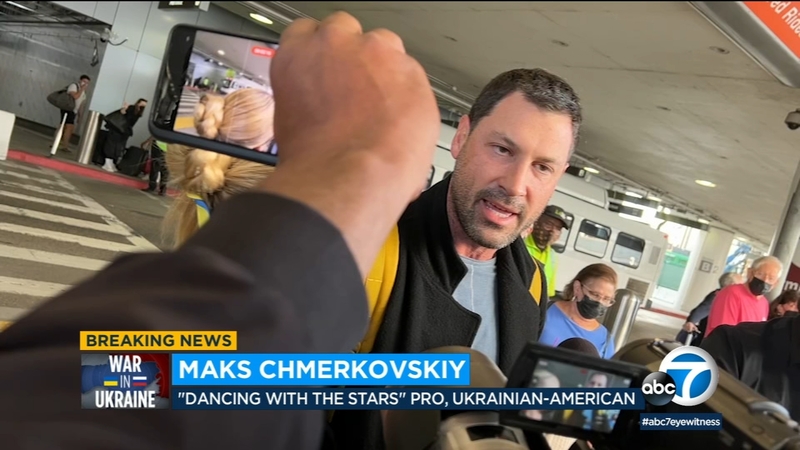 'Dancing' pro Maksim back in LA after fleeing Ukraine

LOS ANGELES (KABC) -- "Dancing with the Stars" pro Maksim Chmerkovskiy is back in Los Angeles after spending days documenting the chaos of the Russian invasion from his native country of Ukraine.

The dancer has been taking to Instagram, keeping his 1.1 million followers updated on what he saw on his way out of the war-torn country.

"I'm trying to process all of this and I just want to go home," he told reporters at LAX.

"I'm trying to process all of this and I just want to go home," he told reporters at LAX.

Chmerkovskiy was in his native country working on a dance competition series when the Russian invasion broke out.

He was forced to leave and went to Poland. He shared a post Tuesday morning showing he made it there safely.

The Ukrainian-American dancer praised Poland and its people for accepting Ukrainian refugees into their country during this troubling time.

In a video he released Monday, Chmerkovskiy said he had been arrested in Kyiv.

"At one point I got arrested," he said. "But -- again -- all good. I promise. But that was probably the least traumatizing moment in this whole thing, as far as Ukraine is concerned, but for me it was just a reality check."

"Dancing With the Stars" veteran, Maksim Chmerkovskiy, posted a new video message Monday, updating his followers on what he's been seeing and experiencing in Ukraine.

Chmerkovskiy was filming a project called "World of Dance U-A" in Ukraine when the invasion began.