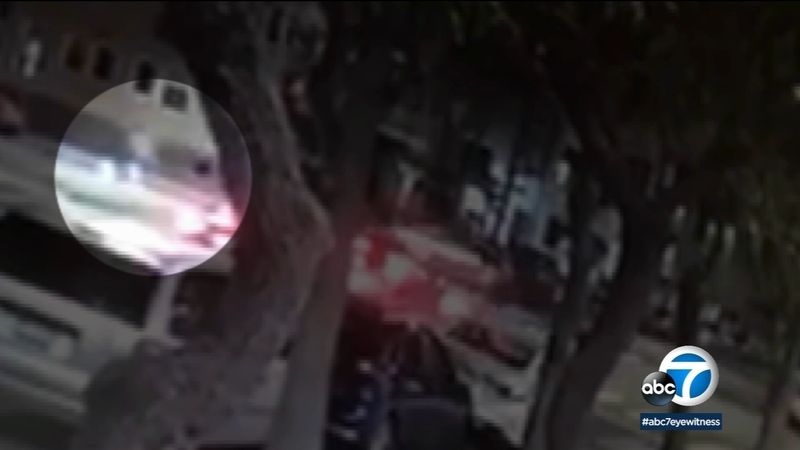 LONG BEACH, Calif. (KABC) -- A man and his dog were killed in a hit-and-run crash involving a burglary suspect who was fleeing from police in Long Beach Tuesday night.

Officers responded to a reported burglary at a commercial businesses in the 2100 block of Gaylord Street just after 11 p.m., according to the Long Beach Police Department. On arrival, officers detained three suspects outside the businesses and a chase ensued when they noticed one of them fleeing the scene in a Mercedes.

During the high-speed pursuit, which lasted about five minutes, the suspect drove through a red light at 6th Street and Magnolia Avenue, striking a pedestrian who was crossing the street while walking his dog.

The suspect, identified as 26-year-old Jyvante West, continued driving before he crashed into a nearby fence and was taken into custody.

Residents of the area heard the impact of the crash.

"It sounded like a loud bang, almost like two cars hitting each other. I couldn't imagine that that was a person," said Anneke Borges, whose car was damaged in the crash.

The victim, identified by police as 32-year-old Jose Hernandez of Long Beach, and his dog were thrown by the impact, sending him about 100 feet from where they were hit. His dog was found under another car.

West is believed to have been under the influence of drugs at the time of the crash, according to police. He was booked on a number of charges, including gross vehicular manslaughter, driving while intoxicated and evading a police officer among others. He was being held on $100,000.

Six other suspects, all from Northern California, were also arrested in the burglary and were each being held on $10,000 bail.
Report a correction or typo
Related topics:
long beachlos angeles countyhit and runburglarypolice chasecar chasepedestrian killeddoghit and run accident
Copyright © 2021 KABC-TV. All Rights Reserved.
More Videos
From CNN Newsource affiliates
TOP STORIES