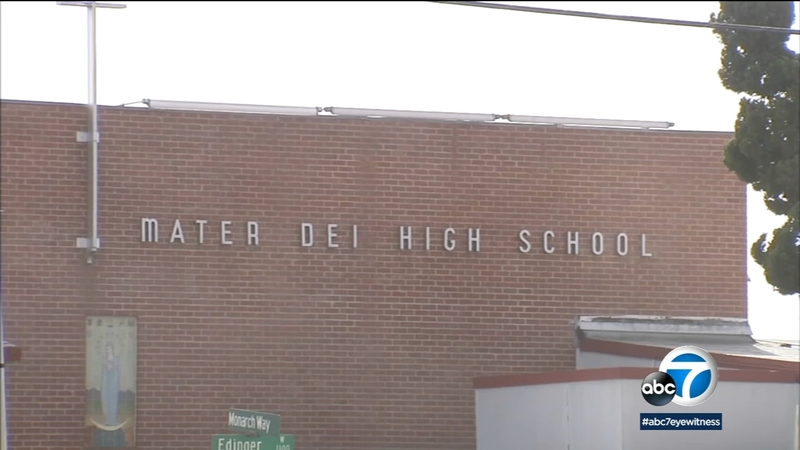 SANTA ANA, Calif. (KABC) -- The family of a former player for the football team at Mater Dei High School is suing the school, claiming he suffered a traumatic brain injury, gashes and a broken nose in a locker room hazing ritual.

The Orange County Superior Court lawsuit was filed Tuesday against the school and the Roman Catholic Diocese of Orange, alleging a wide range of negligence, violation of the California penal code and intentional infliction of emotional distress, the Orange County Register reported.

The alleged incident happened in February before practice, according to the outlet, which cited police reports, surgeon's reports, numerous records, court filings and two videos of the altercation.

The player was allegedly injured during a ritual called "Bodies" in which two players punch each other until one gives up and punches are limited to the torso area. The player was hit hard in the head and face, and there allegedly was significant delay in treatment and informing his parents.

The complaint alleges this student took a blow to the head, suffered cuts, bruises, a traumatic brain injury, a broken nose requiring surgery and was warned by his teammates not to "snitch."

The attorneys representing the family say there was no adult supervision at the time and the student's parents were informed nearly two hours after the incident.

When the plaintiff's father approached the school's head football coach the day after the incident, coach Bruce Rollinson replied, "If I had a hundred dollars for every time these kids played Bodies or Slappies, I'd be a millionaire," adding, he was in a bind from a disciplinary standpoint because the other student's father was an assistant football coach, according to the complaint.

In a letter sent to the Mater Dei community Wednesday, more than nine months after the incident, school president Father Walter E. Jenkins said in part:

"Please know that we take the matter seriously and commit to you that all aspects will be handled consistently and in accordance with the core values of our institution."