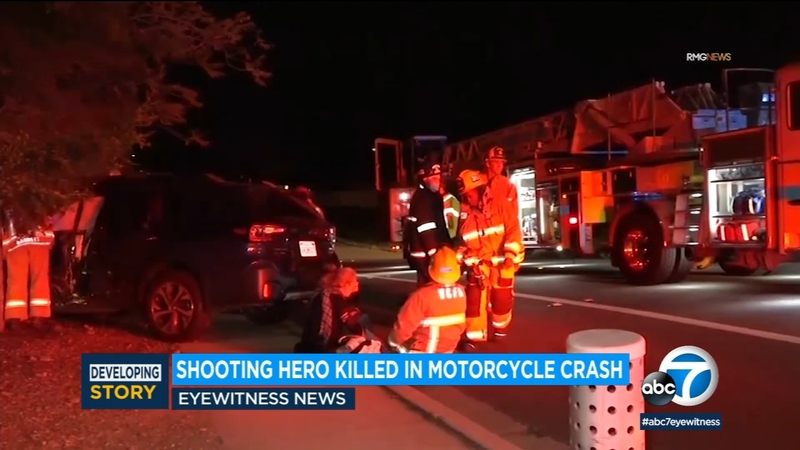 THOUSAND OAKS, Calif. (KABC) -- Matt Wennerstrom, one of the heroes of the 2018 Borderline Bar and Grill shooting in Thousand Oaks who saved dozens of lives during the attack, was killed in a motorcycle crash over the weekend.

The deadly crash happened Saturday shortly before 6:30 p.m. when a motorcycle rider hit a car in the area of Lynn Road and East Kelley Road in the Newbury Park area of Ventura County, officials said.

The Ventura County Sheriff's Department confirmed the identity of that rider as being Wennerstrom Sunday night.

Crews with the Ventura County Fire Department and officers from the Thousand Oaks Police Department responded to the crash site where they found Wennerstrom lying on the ground near the wrecked car. He died at the scene.

The driver and passenger of the vehicle were taken to a local hospital with unknown injuries, officials said.

Investigators said the motorcycle was traveling eastbound on Lynn Road when it crashed into the car. The cause of the collision is under investigation by the Thousand Oaks Police Department Traffic Bureau.

Anyone with information about this incident is asked to call Senior Deputy Marcos Moreno at (805) 947-8289.

The 24-year-old emerged as a hero on that awful November night in 2018, in which 13 people were killed when a gunman entered the bar and opened fire.

When a gunman opened fire inside the Borderline Bar and Grill, most of the terrified patrons ran for their lives, but Wennerstrom immediately rushed to save others. After helping shield others from the shooter, he then risked his own life by smashing out windows with a bar stool, and helping as many as 35 people escape the bullets with their lives.

Eyewitness News spoke with the then 20-year old, still in a bloody t-shirt, just hours after the horrific attack.

"All I did was grab as many people as I could and pull them underneath the table. And then, till I heard the shots, till I heard a break in the shots, and then we got people out of there as much as we could," Wennerstrom told Eyewitness News at the time. "I'm here to protect my friends, my family, my fellow humans. And I know where I'm going if I die."

Twelve people were killed by the shooter at the popular Thousand Oaks bar. Family and friends are grieving the death of a hero.

"He was the one that smashed a window with a chair. When everyone else was, you know, ducking, ducking down, and trying to, you know, escape the gunfire he was the one up in the gunfire trying to get people out," said friend Michael Moses. "He was always the one who wanted to help anybody out, even if it hurt him in some way, he would find a way to help people out."