The meeting was a call to action for corporations and people who are not black.
KABC 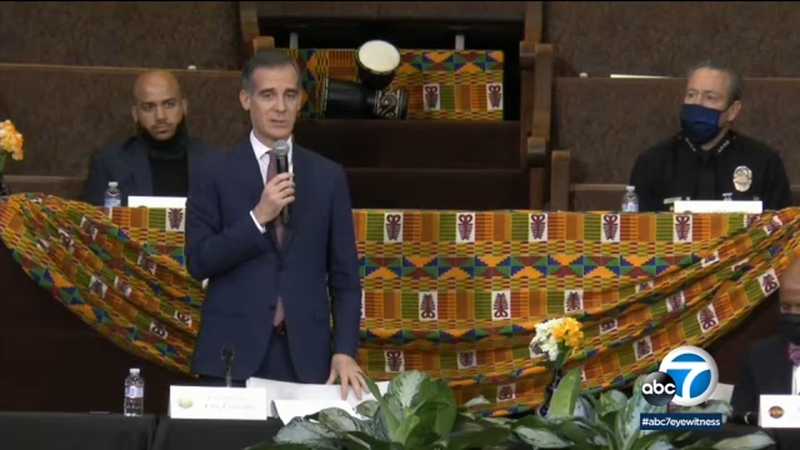 Garcetti gathered with black leaders and law enforcement on Thursday amid more protests in Southern California.

Mayor Garcetti underscored his vision of a new city budget that would pour millions into community investment. It would include paying out dollars to people who have been unfairly treated -- an office of racial equity.

"This is an office where you can bring your complaints and actually get money for the discrimination that you face. This has to be material," he said.

About policing, he says officers are already heavily regulated. But violators are not always caught.

A potential solution: outside prosecutors.

The meeting was a call to action for corporations and people who are not black.

"We have a saying: Justice will not be served until the people who are unaffected are as outraged as those that are affected," Bernard Kinsey with ReBuild LA said at the meeting.

Mayor Garcetti says the budget changes will be a wake-up call.

"I got calls from mayors around the country, some of them saying 'I'm so excited' and others saying 'what the hell did you do? Now I got to shift money.' That's exactly the point. It starts someplace and we say we are going to be who we want to be or we are going to continue to be the killers that we are," Garcetti said.

"At the end of the day, the carotid hold that literally is designed to stop people's blood from flowing into their brain. That has no place any longer in 21st century practices," Newsom said.