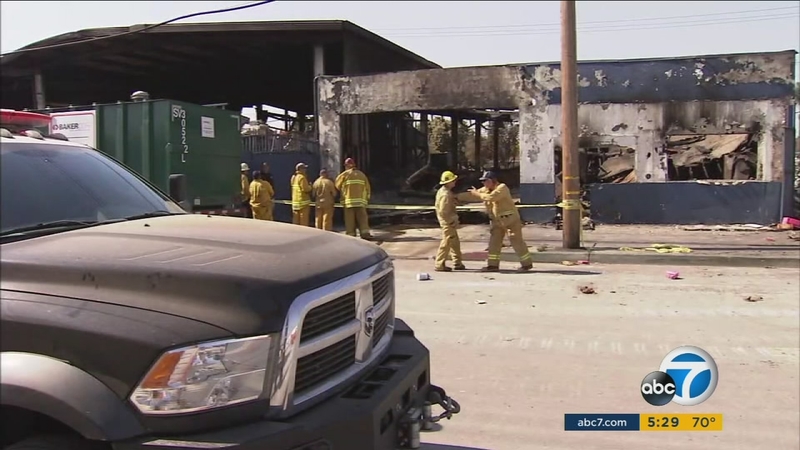 MAYWOOD, Calif. (KABC) -- Residents in Maywood, who live near the area of a magnesium-fueled fire that broke in June, said they are concerned for their health as crews begin to clean up the damaged buildings.

Jose Vazquez said he remembers vividly the early morning explosions that woke him and his wife up that day. The explosions ignited the large blaze that destroyed two businesses, including a scrap metal recycling facility. The fire also damaged a number of nearby homes.

The contaminated ash from the fire spread to the residential neighborhood, forcing dozens to evacuate their homes. After the blaze was knocked down, many of those residents were kept away while the hazardous waste and debris was removed.

Vazquez said he and his wife waited a month before they could return home, which has had to go through a series of repairs.

One of Vazquez's neighbors, Ciria Gonzalez, said there's concern over what could go into the air during the cleanup. The Environmental Protection Agency, the lead agency in the cleanup, has said there's contaminated ash and soil throughout the site that will need to be carefully and safely removed.

"To do that we do a lot dust suppression. Dust suppression is usually done with water so we wet the materials down so they won't turn into dust and jump up into the air," said Jason Musonte with the EPA. "Additionally, we will be doing air monitoring and sampling along the perimeter of the site."

Barriers, such as a 15-foot high fence, will also be put up to protect the homes behind the burned site. Musonte added that the extra barrier shows the agency is making sure that the health of the residents is being looked after.