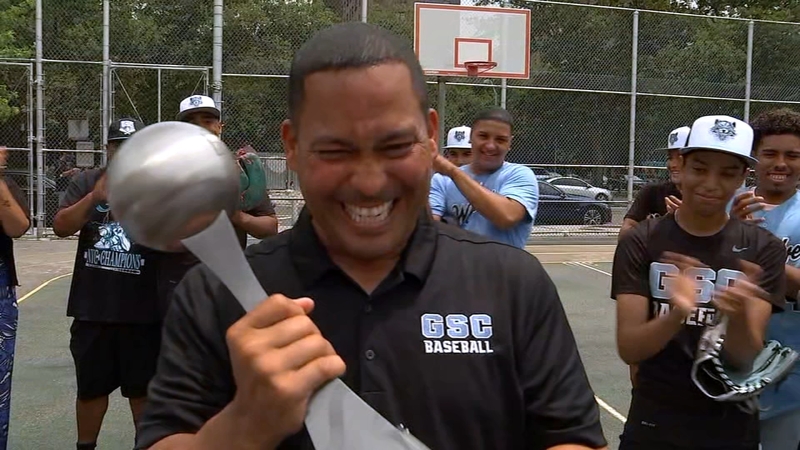 WILLIAMSBURG, Brooklyn -- A Brooklyn volunteer baseball coach who went above and beyond for his students during the COVID-19 pandemic has been awarded an honorary ESPY Award for his contributions.

Grand Street Campus High School's Melvin Martinez is a recipient of the first-ever Honorary ESPY for Youth Sports Volunteers, which recognize the challenges presented to local athletes and their communities and the coaches who contributed in a significant way to helping their athletes, teams, or leagues stay united, safe, and moving forward.

Martinez didn't know his colleague Cynthia Felix had nominated him for his efforts to keep his players motivated, engaged and on the field, all while demanding excellence in the classroom. And he did all while completing an undefeated season.

"He really is a wonderful inspiration to the community and to educators everywhere," Felix said. "When you talk about doing things from your heart because you love it, that's the epitome of Melvin Martinez."

Felix told Martinez that Eyewitness News sports anchor Ryan Field was there to interview him about summer school, so you can imagine his surprise when he heard this instead.

"Your coach put your health and well being and your mental happiness above all else, and that's why we are here today on behalf of ABC7 and 98.7 ESPN, and we want to present coach Melvin Martinez with an honorary ESPY Award today for everything he did," Field said. "Coach Martinez, this is for you. Congratulations."

His sons were on hand for the event.

"What he does for this community is amazing, and I've never seen him get anything in return," son Alex Martinez said. "It's kind of like he's a saint. He's just saved so many people's lives, and he just opens the eyes of many players that come to his high school."

And it was his high school, like every other school throughout the country, that was feeling the negative effects from the pandemic. But like he did so many times before, Martinez went to work.

"I just wanted to make sure that I bring some type of normalcy during that traumatic experience," he said. "So I started making videos of old archives that I've had on each player, sent it to coaches all around the country, set up zoom interviews, and that's how I was able to get some scholarships for my players and bring a smile to their faces. And to bring that smile to their faces, that's my championship every year."

And giving back has always been a priority.

"Melvin said, 'Let's go back to our neighborhood, and let's make a difference with these kids and motivate them like baseball motivated us for a better life here in New York City,'" Athletic Director Tommy Torres said.

Even his sons were unaware of what was coming.

"I am very proud," son Chris Martinez said. "It's kind of crazy. I didn't know he was going to get an ESPY Award. It's just kind of crazy."

Now he just has to find the perfect place to put it.

"My wife's got to find the best spot in the house," he said. "Lebron James, Michael Jordan, Kobe Bryant, and now Melvin Martinez. Is this really happening? This is amazing, I can't believe it."

The ESPYs are just one part of what's being dubbed the "Weekend of champions" on ABC. On Saturday, the women's finals at Wimbledon will air at 9 a.m. on ESPN.

The ESPYs begin at 8 p.m. on ABC, followed by a UFC fight.