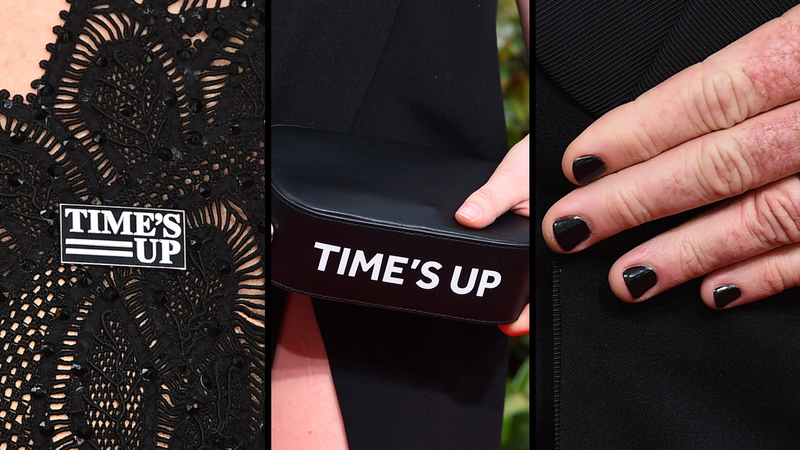 BEVERLY HILLS, Calif. -- The boldest color at the Golden Globe Awards was black as a powerful coalition of A-listers ditched their colorful gowns to take a stand against sexual misconduct in the entertainment industry.

Nearly all of the show's guests - men and women alike - were clad in black dresses and suits on the red carpet. Several guests sported custom #MeToo and Time's Up accessories, a nod to the hashtag that shot to prominence as women shared their experiences with sexual misconduct and the resulting legal fund supporting victims of sexual harassment in the workplace.

During pre-show interviews on the red carpet, gender and equality dominated much of the conversation.

"Time is up on the imbalance of power in society. Time's up on our silence and time's up on women not supporting each other," Kerry Washington said. "We are looking out for anybody who feels marginalized in the workplace."

"We want diversity, we want intersectional gender parity, we want equal pay. I was so shocked to hear that E! doesn't believe in paying their female co-hosts the same as their male co-hosts," Debra Messing said on E!'s red carpet pre-show in a nod to Catt Sadler's departure from the network last year over a pay dispute.

People magazine first reported in December that several high-profile women in Hollywood were planning the protest. Since then, the #MeToo movement has only gained momentum, with the star-studded Time's Up Legal Defense Fund emerging as the de facto leader of the fight against sexual misconduct in the workplace. The fund has raised more than $15 million to support victims of sexual misconduct, harassment and exploitation in all industries.

On the eve of the Golden Globes, the fund's Twitter account confirmed the rumors and encouraged followers to join the protest.

Join us in saying #TIMESUP to the world. #WHYWEWEARBLACK pic.twitter.com/s2V5OSnEpj

"On Sunday we wear black to stand in solidarity with women and men everywhere who have been silenced by discrimination, harassment or abuse," the fund wrote. "Wherever you are, whoever you are, whatever you're doing. Join us."

A series of tweets discussing underrepresentation of women in Hollywood and statistics about sexual harassment in the workplace followed. Several women associated with the Time's Up movement changed their Twitter profile pictures to solid black and spoke about their reasons for participating.

Join me in making your profile picture black in support of all the men and women fighting for respect, equality and meaningful change in the workplace.

I am wearing black today because balance and inclusion and diversity is not some kind of allowance to be made to accommodate people. No, sir. It is a correction of an error. It is a righting of a wrong. And it is going to be done. Now. #TimesUp pic.twitter.com/nVkhWubEwq

#TIMESUP on abuse, harassment & the imbalance of power. Not just in Hollywood, but every industry! Join us TODAY & wear black! Use the hashtag #WhyWeWearBlack & tell us why you stand with @TIMESUPNOW. @TraceeEllisRoss @iamrashidajones @kerrywashington @brielarson @TessaThompson_x pic.twitter.com/1CON33X7jC

Eight actresses, including Meryl Streep, Michelle Williams and Emma Stone, announced Sunday that they will be bringing gender and racial justice activists as their guests, including MeToo founder Tarana Burke and the director of the National Domestic Workers Alliance, Ai-jen Poo.

The demonstration comes after a watershed period during which dozens of men in media, entertainment, journalism, politics and business have been accused of varying degrees of sexual misconduct. Among those felled by the accusations are cinema mogul Harvey Weinstein, former NBC anchor Matt Lauer, comedian Louis CK and Alabama Senate candidate Roy Moore.

In the wake of allegations against Weinstein, a social media campaign encouraged women to use the hashtag #MeToo to describe their experiences with sexual misconduct in an effort to encourage open conversation about the ubiquity of sexual harassment.