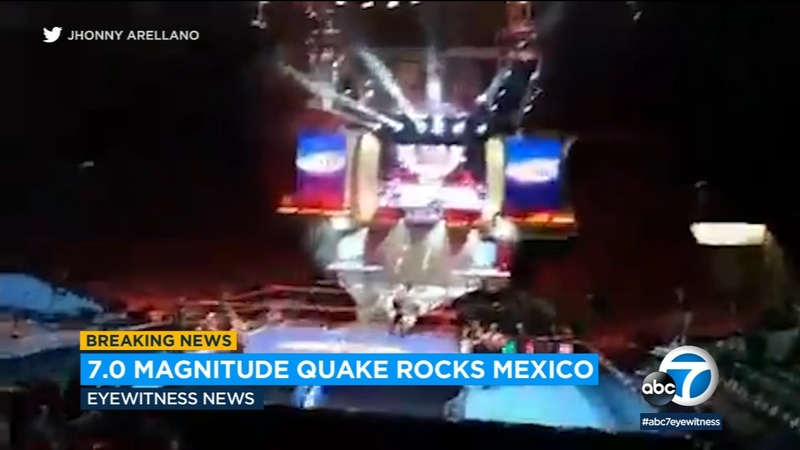 ACAPULCO, Mexico (KABC) -- A magnitude 7.0 earthquake struck near the Mexico resort city of Acapulco late Tuesday, according to the USGS.

Authorities were investigating for potential structural damage and injuries.

The shaking was felt in Mexico City, more than 200 miles north of the epicenter. Video from a wrestling arena in the capital shows the building shaking, and an announcer warning the audience to not run.

The U.S. National Weather Service warned that tsunami waves are possible on the coast up to 300 kilometers - 186 miles - from the epicenter.

The mayor of Acapulco, Adela Román, said in statement to the television news outlet Milenio that "there is no really serious situation" so far and no reports of casualties.

"There are nervous breakdowns, people are worried because there have been aftershocks," she said, adding that there are "many gas leaks in many places" as well as some landslides and fallen walls.

In Mexico City, the ground shook for nearly a minute in some parts of the capital, but was less evident in other parts. Some people evacuated their buildings briefly, but most quickly went back inside on a rainy night.

Mexico City authorities said there were no early reports of significant damage in the city, though they said electricity was knocked out in some neighborhoods.

Mexico's National Civil Defense said it was conducting reviews in 10 states, but had not received reports of victims nor serious damage.

DEVELOPING: This story will be updated as more information becomes available.

I expect this earthquake will be widely felt in Mexico City despite being several hundred kms away. Why?

Mexico City sits on a sediment filled basin that causes seismic waves to get slower and bigger, as well as bounce off the surrounding bedrock (basin amplification). https://t.co/JwZhKbUpEM pic.twitter.com/egcDtDocqS