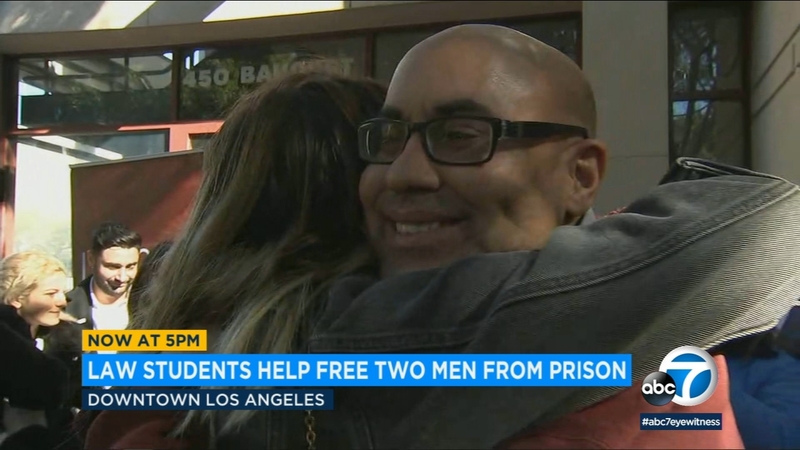 LOS ANGELES (KABC) -- Michael Tirpak, 43, walks out of the Department of Corrections custody after having his murder conviction of life in prison without parole overturned. Tirpak has been in prison for 25 years.

DeAndre Mallard, 34, is also free man after serving 16 years in prison for a crime he says he didn't commit, eventually reaching a plea deal. Both men free because of the hard work of students and professors at Loyola Law School.

"Blessed, excited, all of that at the same time. Appreciative," Tirpak said.

"These are great people. Without them, I wouldn't be here. They fought hard to get me home and I'm glad to have them in my corner," he said.

Tirpak was convicted of first-degree murder in 1996 for being an accomplice to a murder during an attempted robbery. But he maintained he had no involvement and evidence showed he was using a pay phone at the time the murder took place.

The laws at the time held accomplices to the same legal consequences as someone who committed the murder. But, thanks to a new California law known as the felony murder rule, Tirpak is the first person in L.A. County to walk free because of the legislation.

"I might dedicate my time to struggling youth like I was. So they don't end up even in this route, in this path - jail," he said.

"We do a lot of the investigation on the cases so we will go and interview witnesses. We'll read through police reports and try and figure out what happened," she said.
The Juvenile Innocence and Fair Sentencing Clinic at Loyola also helped Mallard because they discovered prosecutorial misconduct in his case.

"It's tough be 17 years old in the hands of the police. It's tough to prove your innocence in a situation like that," said professor Chris Hawthorne, with the JIFS Clinic.

Mallard said changes need to be made in the justice system.