Protesters say they wanted to demand answers from Miguel Arias about when Fresno businesses would reopen, but Arias claims he felt threatened and was worried for the safety of his family.
KABC 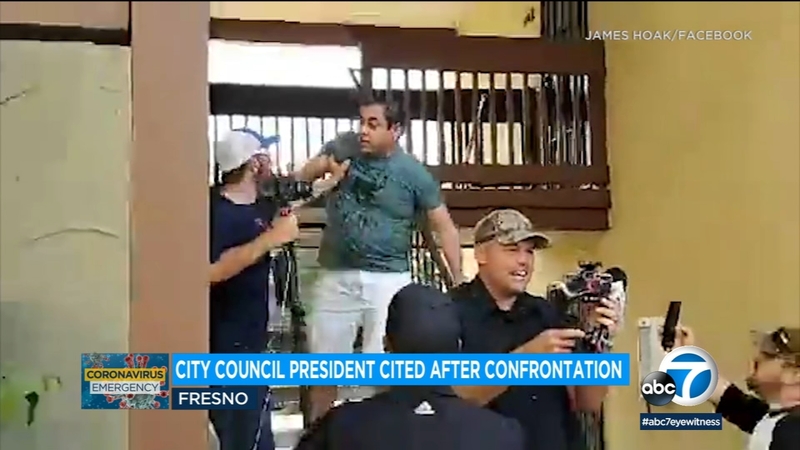 Fresno official cited after confrontation with protesters outside his home

FRESNO, Calif. (KABC) -- The president of the Fresno City Council is facing three counts of assault after a confrontation with a group of protesters who showed up outside his home on Tuesday.

Cellphone video of the incident shows the group of about 15 protestors outside of Miguel Arias' apartment. The group says they wanted to demand answers from Arias about when Fresno businesses would reopen, but Arias claims he felt threatened and was worried for the safety of his family.

"There are business owners who are losing everything and we just wanted to ask him a couple of questions," said Ben Bergquam, who was among the protesters. "As I was saying that, he comes out of the apartment, grabs me by the arms and tried to throw me down the stairs."

Arias says it became physical when some of the individuals would not move away from his home.

"I asked him to leave, I told him this wasn't the place, this was my home, and he refused to do it, so I moved him out of the way and I escorted him down the stairs," Arias said. "Folks didn't want to give way to my private property, so I moved them out of the way."

Video shot by one of the protesters is now part of a police investigation and shows Arias physically placing his hands on a man in a black shirt at the top of his staircase.

Seconds later, the video clip shows Arias shoving another man down the staircase away from his home.

Investigators are still trying to determine if they tried to break into Arias' home, as he claims.

Extra security was added to other council member's homes, as well as the mayor. A short while later, a group of about 25 visited the home of Fresno Mayor Lee Brand.

"When they arrived, I went out to answer their questions and we had a peaceful discussion on my sidewalk. I'm willing to talk with anybody who wants to have a civil conversation about the best way to keep our city safe and healthy," Brand said in a statement.

Arias plans to file charges in the coming days and says he looks forward to his day in court to justify his actions.