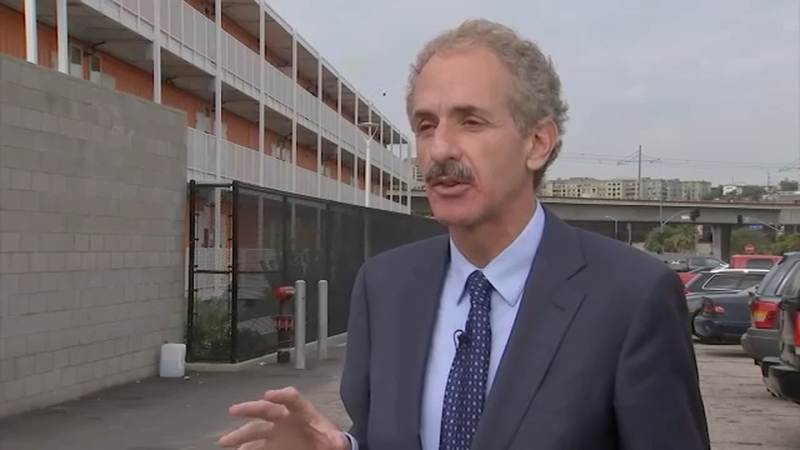 LOS ANGELES (KABC) -- Los Angeles city attorney and mayoral candidate Mike Feuer believes some of the solutions to the homeless crisis are already in place -- they just need to be expanded.

If elected mayor, one of the models Feuer says he would fast-track is the Hilda Solis Care First Village near China Town in downtown L.A., built on land that was supposed to house a new men's central jail.

"There are a lot of false choices in our homelessness debate," Feuer said in an interview with ABC7. "Do we focus on interim emergency housing or permanent housing? We can do both."

The county owns and operates the site, which has been open for a year with 232 units. Feuer believes it's the right model for two reasons.

So how was the Hilda Solis Care First Village built so quickly?
EMBED More News Videos

The top five candidates in the race to be L.A.'s next mayor will face off in a debate this Sunday, right here on ABC7.

The county waived competitive bidding, which the mayor of Los Angeles could do if a state of emergency was declared. Instead of the project going out to multiple entities to determine who will design and build the facility, the county had one company do it all.

"People can't just get their mental health issues solved in a short period of time or their substance abuse issues solved briefly," said Feuer. "We need to be able to change rules, to get resources and to be a team and then on the streets of the city. Our outreach services are not working effectively.

"I was just talking to someone yesterday about the fact," said Feuer. "Take Hollywood, for example. There are multiple outreach teams there. They frequently overlap. They don't coordinate with each other and they have different objectives."