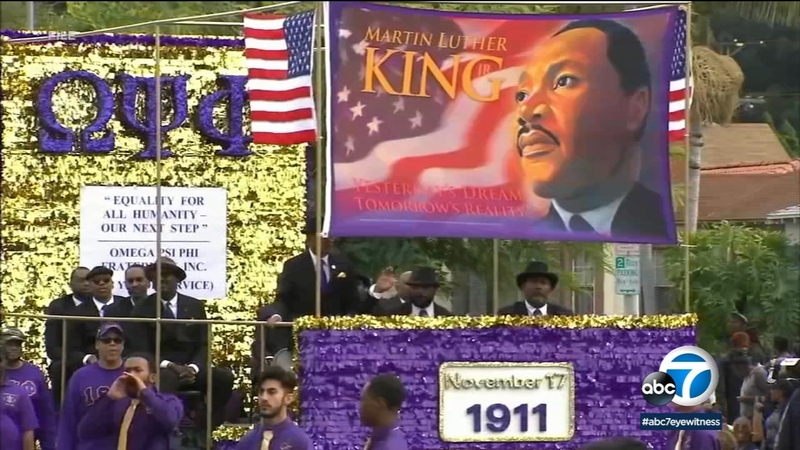 The surging pandemic forced the cancellation of the largest and longest-running MLK Day parade in the nation, for the second year in a row. However, that's not stopping the Kingdom Day Parade Committee in Los Angeles.

A free in-car COVID-19 rapid-testing event was held instead.

Instead of floats and marching bands rolling along Degnan Boulevard, cars lined up waiting to take a free COVID-19 test.

"It was the biggest disappointment," said Dr. Adrian Dove, chairman of the Kingdom Day Parade and the Congress of Racial Equality. "We had hundreds of participants lined up, and bleachers. And we spent a lot of money getting it all set. And it was only a week and half before the parade that the (COVID) numbers shot up so high,"

So this year, Dove - who worked for Dr. King years ago to register Black voters - says parade organizers decided to postpone their annual Kingdom Day Parade until June. Instead, Monday served as a day to distribute about 500 rapid COVID-19 tests in a drive-thru fashion.

"I love the fact the line is wrapped around the corner in terms of testing," Bass said. "Nobody likes to wait, but the idea that so many people know how important it is to be tested, to be vaxxed, to be boosted, that's very encouraging."

"Trying to make ends meet, you know, trying to feed my family. What else can I do but continue? Days like today remind me what it takes to continue to fight," said Sabrena Whigham, a local vendor who has been coming to the parade for years.

"We are in adverse situations, so that reminds me, even though how tired I feel, how weary I get, it was nothing like what they suffered, the dogs and the beating, so I must carry on. I must fight on, 'cause that's what he did for this generation, to push, and we're doing it," added Whigham.

In Washington D.C., the late reverend's son, Martin Luther King III, and his family, along with hundreds of others, marched over the Frederick Douglass Memorial Bridge. They're demanding that the White House and Congress pass voting rights legislation.

Vice President Kamala Harris says the fight is not over.

"Today we must not be complacent or complicit. We must not give up, and we must not give in. To truly honor the legacy of the man we celebrate today, we must continue to fight for the freedom to vote, for freedom for all," Harris said.