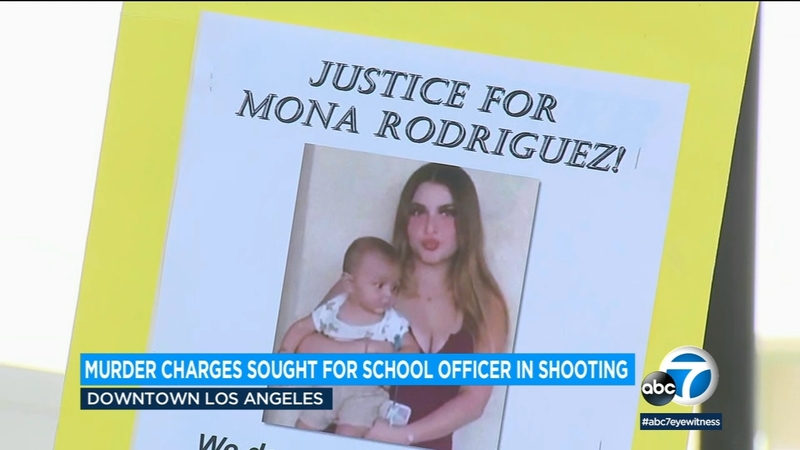 Mona Rodriguez died Tuesday afternoon after being on life support since Sept. 27, according to a statement.

Rodriguez "gave a heart, a liver, lungs, and two kidneys, to save the lives of 5 people," the family's statement said. "All the Doctors and Nurses of Long Beach Memorial Hospital on Mona's floor gave a Hero's Celebration to Mona by standing in the hallway as Mona was taken to the operation while her favorite song was played."

Rodriguez, the mother of a 5-month-old son, was shot while she was in a moving vehicle in a parking lot near Millikan High School in Long Beach.

Investigators say she was seen involved in a fight before the officer opened fire.
EMBED More News Videos

Mona's friends and family say she was unarmed and want murder charges brought against the officer.

At a press conference Tuesday, Iran Rodriguez, the woman's oldest brother, recounted conversations he had with her surgeons and medical scans that he was shown.

"I was told that the bullet used was a hollow-type point bullet ... on impact, it exploded inside her brain and shards of metal bounced inside her head," he said.
EMBED More News Videos

The officer has been placed on administrative leave, pending the outcome of the investigation by the District Attorney's office and the Long Beach Police Department.

"This school safety officer decided he was going to be the judge, jury and the executioner," said the woman's other brother, Omar Rodriguez.