While the Centers for Disease Control and Prevention said the risk to the public is low, it's actively monitoring cases.
KABC
By Denise Dador 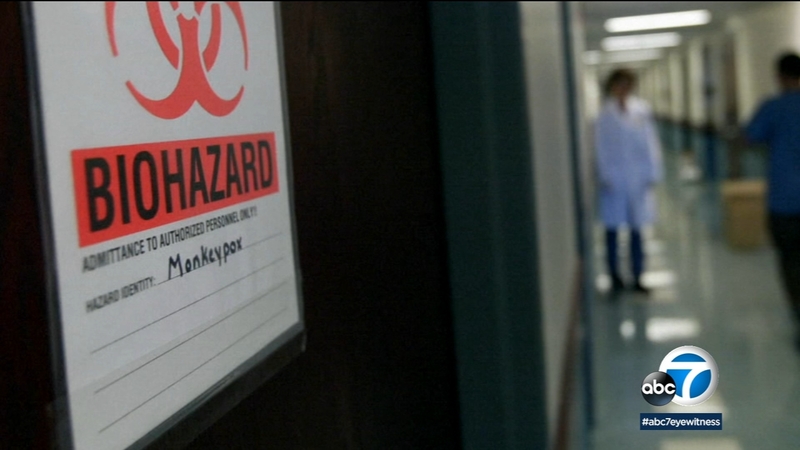 SACRAMENTO, Calif. (KABC) -- California may have its first official case of monkeypox.

Sacramento Public Health officials said a case is most likely present in the county.

The infected person is not being identified, but officials said they recently traveled to Europe where there are other cases of the disease.

While the Centers for Disease Control and Prevention said the risk to the public is low, it's actively monitoring cases and raising awareness among doctors in the U.S.

For now, travel is the common denominator, and contact tracing appears to lead back to two large gatherings that took place in Europe. We now know of seven cases being investigated in the U.S. and one confirmed.

The virus, typically only seen in Africa, is spreading with more than 200 cases confirmed or reported as suspected cases in 18 countries.

Doctors said it's spread by coming into close contact with lesions, bodily fluids, or respiratory droplets.

"You have to be very close," said Dr. Edward Jones-Lopez, an infectious disease specialist with Keck Medicine of USC. "It's through droplets, but it can also be transmitted through contact, open wounds ... Things like that."

The flu-like symptoms like fever, chills and headache can lead to raised rashes with a recovery time of two to three weeks.

The CDC is raising awareness in the LGBTQ+ community because many of the cases worldwide involve men identifying as gay or bisexual.

An adviser to the World Health Organization said the "leading theory" to explain the outbreak is sexual transmission at rave parties in Spain and Belgium.

"I don't think that there's a great risk to the general community from monkeypox right now in the United States," said Dr. Jennifer McQuiston with the CDC. "I think that we need to pay close attention to the communities in which this might be circulating."

The government is releasing some monkeypox vaccines to be made available to a small number of people who've been exposed.

"It's a live virus that is weakened, and because of that, it is contraindicated in a small, but important group of patients with weakened systems," said Jones-Lopez.

On a conference call with clinicians nationwide Tuesday, a CDC official shared details on how to identify and contain monkeypox.

The spokesperson emphasized the virus "does not have the potential to become a pandemic."