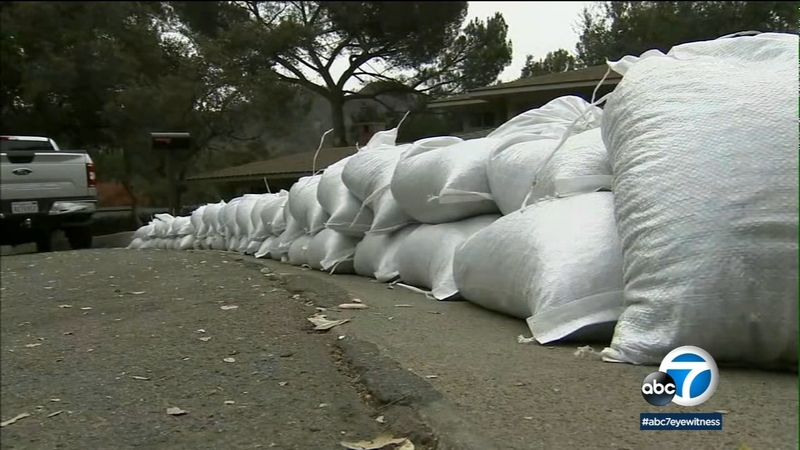 MONROVIA, Calif. (KABC) -- Southern California's first storm of the season is expected to bring rain and snow to the region on Monday, elevating concern about possible mud and debris flows in burn areas and road closures due to snow.

Homeowners in Monrovia are taking the approaching storm seriously, filling dozens of sandbags with gravel amid fears the storm could unleash torrents of mud and debris.

Residents of neighborhoods surrounded by charred hillsides made by the Bobcat Fire are building barricades to protect their homes from storm damage.

One of the largest fires in Los Angeles County history, the Bobcat Fire tore through more than 100,000 acres in the San Gabriel Mountains and the Angeles National Forest in September. The flames threatened homes and burned dangerously close to communications equipment on Mount Wilson.

"We definitely are prepared. It is what it is. We're taking the precautions that we need to. We're getting it ready," said Ashley Howie of Monrovia.

The L.A. County Department of Public Works and Monrovia officials are telling residents of homes in the burn area there may be minor to moderate flooding and mudflows on some streets.

"Obviously, we don't really know the extent of what's going to happen," said resident Stephen Kallin. "Nobody here seems to have ever dealt with mud flows or mudslides because these hills haven't burned in 50, 60 years, but we'll do our best to stay out of danger's way."

The Grapevine may also see a dusting of snow from the storm, which could cause issues for drivers and possibly result in shutdowns along the busy stretch of the 5 Freeway.