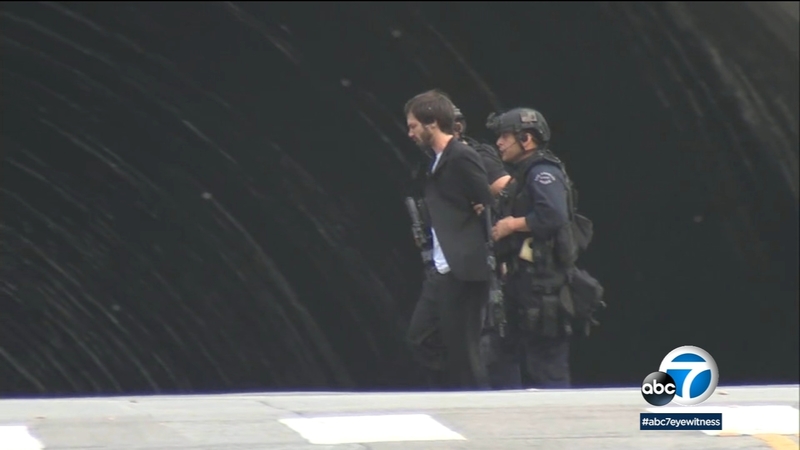 Monrovia kidnapping suspect in custody after standoff in DTLA

MONROVIA, Calif. (KABC) -- The suspect in a Monrovia woman's kidnapping was taken into custody by a Los Angeles police SWAT team Tuesday morning after a four-hour standoff in a parked car, authorities said.

According to the LAPD, officers found 27-year-old Robert Anthony Camou asleep inside a parked 2017 Toyota Prius about 2:45 a.m. near the intersection of Third and Hill streets.

A barricade situation ensued after police tried to make contact with Camou and he refused to get out of the locked vehicle, officials said. Hours later, two armored LAPD vehicles were alongside the car when officers deployed tear gas and smashed the rear window.

Camou exited through a passenger-side door with his arms raised and was taken into custody without further incident. He had previously been identified as the alleged kidnapper in the case, which authorities believe originated with a domestic violence incident.

#monroviapd and #LASD Homicide Detectives are seeking the public’s help in locating a kidnapping suspect and victim. pic.twitter.com/TspeL0CyvM

Monrovia police said investigators found indications that Amanda Kathleen Custer had been assaulted Monday morning and taken against her will in the back of the gray Prius sedan, with California license plate No. 8AOR167, in the 600 block of Vaquero Road. Blood was recovered at the scene.

The whereabouts of the 31-year-old victim remain unknown.

"She has not been seen or heard from since yesterday morning," said Lt. Scott Hoglund of the Los Angeles County sheriff's Homicide Bureau. "We are very concerned for her well-being. We're asking her, if she's OK, to please contact any law-enforcement officer."

UPDATE: Kidnapping suspect in custody. Still no sign of his ex girlfriend Amanda. The vehicle is being impounded. @abc7 pic.twitter.com/W9OYtXXFMh

"He has made over 100 numbers to verbally bash me," Custer said in a court document at the time. She went on to describe an uninvited visit to her home by Camou: "He turned around, came running at my window, and broke my double-pane window with the hatchet."

Camou lives with his parents in their Monrovia home, while Custer lives about a block away with her grandmother.

Diane Biggle, a neighbor of the suspect's parents, described them as one of the nicest couples in the community, adding that they've lived in the area for more than 20 years.

"No matter how well you parent a child, you know, outside influences come in and it's absolutely no reflection on the parent at all," said Biggle. "They've been wonderful, wonderful people and it's just too bad that their son took a wrong turn."