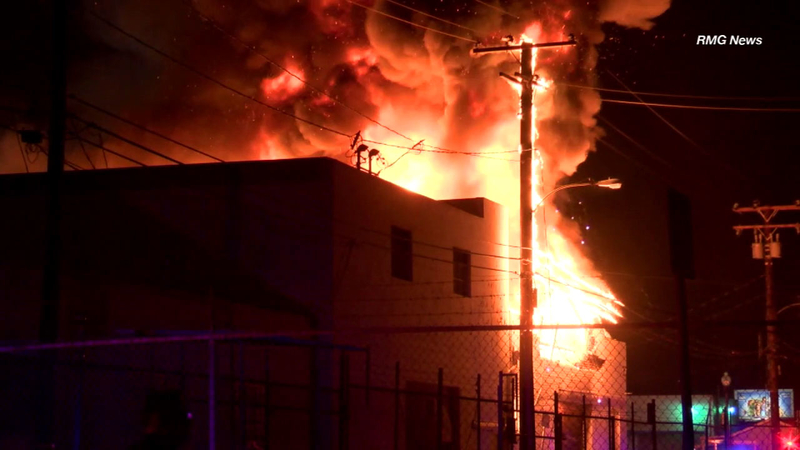 MONTEBELLO, Calif. (KABC) -- An explosive fire at an auto body shop in Montebello overnight left hundreds of residents without power and some evacuated Wednesday morning.

Firefighters and police responded to Seidner's Collision Center in the 300 block of W. Whittier Boulevard at about 12:30 a.m. after receiving calls from residents hearing loud explosions.

When authorities arrived, they found heavy fire showing from the back of the building and a power line exploding.

Fire officials said the blaze was a dangerous one to battle due to chemicals inside the building and the structure's stability. The back portion of the building partially collapsed before firefighters declared a knockdown.

"The next thing we know, we just hear a huge explosion. My dad was actually the one hearing it...but definitely felt the quake. It literally was like the whole house shook for like two seconds," said one nearby resident.

Several people were evacuated from their homes during the firefight, but were allowed back in by 4 a.m.

Along with the damage to the structure, several vehicles parked inside for service were said to be a total loss.

About 300 residents were without power due to the fire. Crews were working to repair the damage, which was expected to be restored at about noon.