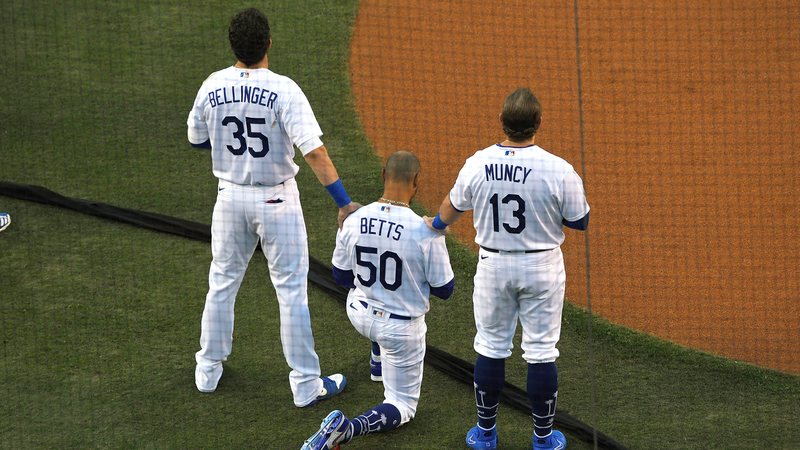 LOS ANGELES (KABC) -- With the season underway and Major League Baseball wrapping its arms around the Black Lives Matter movement like never before, Los Angeles Dodgers star Mookie Betts and several San Francisco Giants players kneeled Thursday during the national anthem before the opening day game as a sign of unity for social justice.

Players and coaches from both clubs wore Black Lives Matter T-shirts, and the letters "BLM" were stenciled into the back of the mound at the center of the diamond. A BLM stencil will appear on pitcher's mound across the majors during the opening weekend.

During the "Star-Spangled Banner," Betts took a knee, with Max Muncy and Cody Bellinger's hands on his shoulders.

Betts and Dodgers manager Dave Roberts were both raised by fathers who served in the military. A few years ago, after Colin Kaepernick took a knee to peacefully protest social injustice and police brutality toward people of color in the U.S., Betts and Roberts each spoke out against not standing for the national anthem, pointing to the need to show respect for those in uniform.

RELATED: Mookie Betts, who once said he would always stand for anthem, takes knee before Dodgers' opener

On Thursday, both men demonstrated a renewed perspective toward the Black Lives Matter movement.

Roberts, whose father served 30 years in the Marine Corps, lent his voice to the demonstration, saying that standing for the anthem and protesting the systemic racism that still pervades this country are "not mutually exclusive."

"As I've learned, I just believe that you're not trying to disrespect the soldiers, men and women that serve our country and lay their lives on the line every single day, my father included," Roberts said.

Betts, beginning his first season as the Dodgers' right fielder, acted on it, taking a knee before the first pitch at Dodger Stadium -- less than four years after saying he would always stand because his father, Willie, served in the Vietnam War as a member of the Air Force.
Meanwhile, in the nation's capital, the Washington Nationals and New York Yankees also knelt in unison before the first game of the baseball season as part of an opening day ceremony Thursday night that featured references to the Black Lives Matter movement, the coronavirus pandemic -- including an off-the-mark first pitch by Dr. Anthony Fauci -- and the home team's 2019 championship.

Back in Los Angeles, the Dodgers began their campaign against their division rival by scoring seven times over their final two at-bats to thump the Giants, 8-1.

Kike Hernandez was the hitting star for the Dodgers, going 4-for-5 with a two-run homer and five RBIs. Hernandez delivered a two-run single while Los Angeles scored five times in the seventh.
Betts was 1-for-5 with two strikeouts in his first game since signing the second-richest contract in major league history. Betts scored the tiebreaking run in the seventh on a fielder's choice.

RELATED: 2020 MLB season preview: Power Rankings and everything you need to know for 60-game sprint

Dustin May allowed one run over 4 1/3 innings of his first opening-day start. He was given the opportunity when Clayton Kershaw went on the injured list with back spasms.

L.A. will play their second game against the Giants on Friday. First pitch is at 6:40 p.m.