A man spoke to Eyewitness News about a horrifying collision in Corona where his motorcycle was wedged onto the bumper of a speeding minivan on the 91 Freeway.
KABC
By Amy Powell 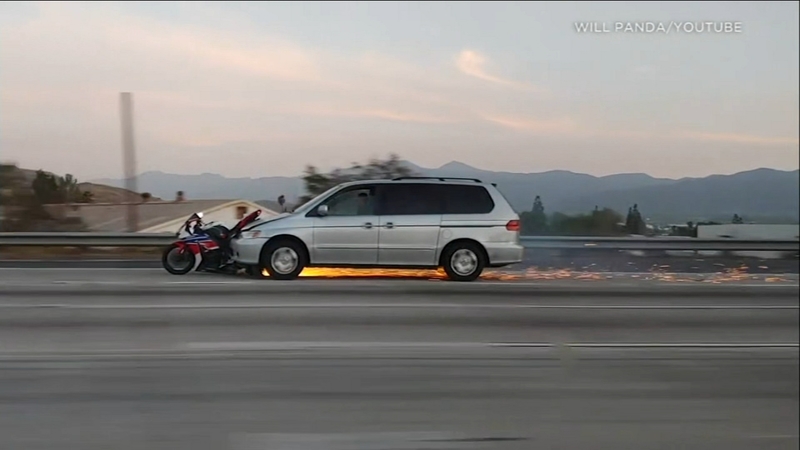 CORONA, Calif. (KABC) -- A man spoke to Eyewitness News about a horrifying collision in Corona where his motorcycle was wedged onto the bumper of a speeding minivan on the 91 Freeway in a bizarre hit-and-run crash captured on camera.

Dramatic video shows the vehicle dragging the motorcycle Friday night as sparks flew, with the rider nowhere in sight after being thrown from his Honda.

"I was just in my lane, going, thinking about which way I'm gonna go home because of traffic and then, boom! He just hit me out of nowhere," Chain Arunritthirot said.

Video shows a silver minivan speeding down the eastbound 91 Freeway in Corona and throwing off sparks Friday night. When the eyewitness driver catches up to the minivan, he can't believe what he sees.

The rider was struck while heading eastbound on the 91 Freeway near the 15 Freeway.

"He hit me. I was tumbling. When I finally came to a stop, I couldn't get up. Some couple pulled over, helped me off to the side of the road," Arunritthirot said.

Police say the driver of the minivan, 25-year-old George Valentin of Corona, slammed into the rear of the motorcycle and never stopped.

"I didn't know where my bike went. I was looking, like, we were all asking that question: Where's the bike at?" the victim said.

The witness who recorded the video exited the freeway and spotted the motorcycle on the side of the road -- along with the minivan's front bumper.

Authorities say Valentin exited the freeway and later dislodged the motorcycle while speeding along surface streets before crashing into a fence. The driver of the minivan allegedly tried to flee the scene but was later arrested.

The motorcyclist was able to walk away with minor scrapes and bruises and can't believe he survived.