KABC
By Rob Hayes
TARZANA, LOS ANGELES (KABC) -- A Tarzana family was startled by the sight of nature intruding into their backyard, as a collared mountain lion attacked a raccoon only feet from their window.

The family's shocked reaction, screaming at the big cat, may have saved the would-be prey's life.

The mountain lion burst through the family's back gate, raccoon in his mouth, about 1:30 a.m.

"I see a big mountain lion holding some animal, I can tell it's a raccoon. The mountain lion was really, really big!" Elhanani said.

The raccoon was screeching as it struggled to get away. The noise from the ruckus caused the entire family to wake up and see what caused the commotion.

While the family looked out the window, Elhanani's wife screamed.

That prompted the lion to drop his prey and stare in the direction of the house. Then he fled the front yard, leaving his prey behind.

The raccoon struggled in its attempts to regain composure. But eventually it was able to leave the yard on its own.

"I think he lost his meal and I don't know if the meal survived," Elhanani said.

The mountain lion was fitted with a GPS collar and federal officials with the Santa Monica Mountains national recreation area believe it was P-63.

P-63 is a male mountain lion born around December 2016 who is known to roam between the Simi Hills and the Santa Monica Mountains. He is the only living tracked lion in the area that biologists say has found a way to cross back and forth over or under the 101 Freeway.

When biologists recaptured him to replace the collar, they noted he had many healed wounds, a common indication of territorial fights.

Wildlife officials say the GPS collar later indicated P-63 had moved on from the Tarzana neighborhood and was last located in Topanga State Park.

Cougar sightings are not out of the ordinary for the Santa Monica Mountains area. Tarzana has had several sightings of mountain lions roaming around different properties, and they are suspected to be culprits in several missing dog cases.

Elhanani understands living where he does, that wildlife is part of the territory. Still, seeing a violent attack that close in his backyard causes concern for the safety of his family.

"When you have kids and dogs, it's a little scary to see but it is what it is. They are here, they live here and I don't know what else we can do about it," Elhanani said.
Report a correction or typo
Related topics:
tarzanalos angeleslos angeles countysan fernando valleymountain lion sightingraccoonsanimal attacksurveillancesurveillance camerasurveillance video
Copyright © 2020 KABC-TV. All Rights Reserved.
RELATED 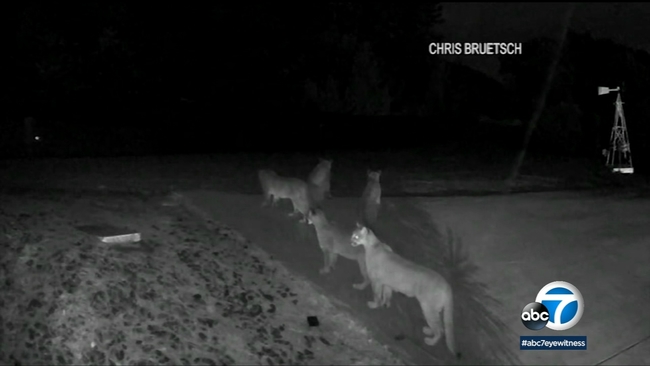