"She saw a fin coming out of the water towards her," the girl's mother said.
KABC 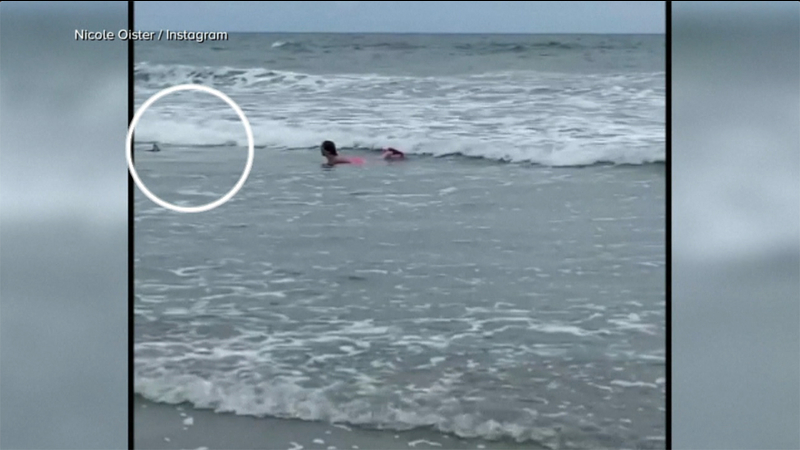 MYRTLE BEACH, S.C. -- Video shows the moment a young girl enjoying the ocean at a South Carolina beach sees a shark's fin coming out of the water and approaching her.

Sara Oister, 11, was boogie-boarding in the water at Myrtle Beach before the terrifying encounter.

"I was taking video of her, and all of a sudden, she starts running out of water," said Sara's mom, Nicole Oister. "She said she saw a fin coming up out of the water towards her ... I looked back on the video to see if I had captured it, I did."

Myrtle Beach is a popular summer destination along the Atlantic Coast, and nearly 40 species of sharks call the local waters home.

"Even though I know we're in their habitat, I didn't think I was going into that day thinking I was going to be right next to a shark," Sara said.

Her encounter echoes a similar scene in May when a 6-year-old girl swimming at Hawaii's Kalama Beach was inches away from a shark and escaped just in time.

Terrifying video shows the moment a 6-year-old girl playing in the waters of Hawaii runs away from an approaching shark.

George Burgess, the director emeritus of the Florida Program for Shark Research, said researchers are not noticing anything unusual in terms of interactions between humans and sharks.

"But what we are seeing, of course, is an increased population of humans that are in the water every year, so the density of humans in the waters is higher than ever. We're engaging in aquatic activities that put us at risk," Burgess said.

And although reported shark sightings seem to be spiking, attacks are still rare. Only one shark attack was recorded on South Carolina beaches in 2021, researchers said.

Experts say swimmers can take precautions to prevent shark attacks. Always be aware of your surroundings at the beach, as shallow areas can serve as nurseries for sharks.

Also, try to swim in groups, avoid erratic movements, and leave shiny jewelry behind, as sharks can confuse it for fish scales, experts say.

As for Sara, she now has a story she can share with her friends.