September 24 is National Horchata Day, check out how Michefresca King is adding their own flavor to traditional sweet drinks or aguas frescas.
KABC
By Eric Resendiz and with USC-Dimelo students Ariel Guadron and Jillian Russell 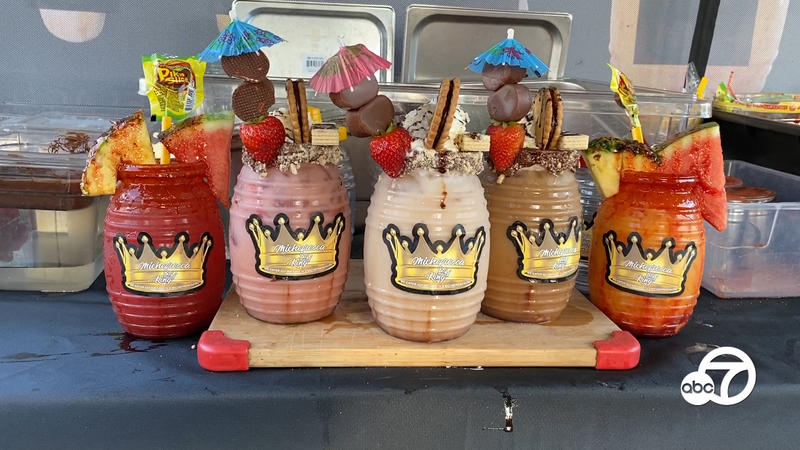 SOUTH LOS ANGELES (KABC) -- Michefresca King is an aguas frescas or sweet drink stand in South Los Angeles that has turned horchata, a traditional Hispanic drink, and many other sweet flavors into confectionary concoctions -- that are sure to sweeten up your Instagram feed and taste buds.

"We just kind of like take the horchata to a whole other level. We turn into a dessert Michelagua form of it," said Guilver Lopez, the owner of Michefresca King.

Guilver Lopez and his wife are the ones behind these dessert drinks and opened up their business on the corner of Avalon Boulevard and 51st Street about six months ago.

"We put a little whip cream on there, little straws, a little wafer candy, and these little marshmallow candies too," said Lopez. "We do the regular horchata, strawberry horchata or the coffee horchata."

September 24 marks the second annual National Horchata Day that celebrates horchata as a staple in a variety of Hispanic cultures.

According to Sarah Portnoy, a USC Spanish professor and an expert in food and Hispanic culture, horchata originated in 13th century Spain and its recipe is different depending on the region just like here in Los Angeles.

"The way that they make horchata is gonna be different than in Sinaloa, or in Sonora, because just like with tamales, or many other Mexican dishes, every region has its own specialty," said Portnoy.

However, some L.A. restaurants still offer traditional horchata such as Guisados, a family-owned Mexican restaurant in Boyle Heights.

"I think it goes even beyond horchata like the entire Guisados menu is a reflection of our history," said Armando De La Torre Jr., the owner of Guisados.

Both locations share their own version of the traditional Hispanic drink, the Horchata, and share the same core of Hispanic values.

"When your mom or someone makes it, you try to recreate that flavor every single time and I feel like what we do, you know, is kind of the same concept," said Lopez. "When you try it, you wanna come back for more. You get that simple feeling of the comfort of your home."