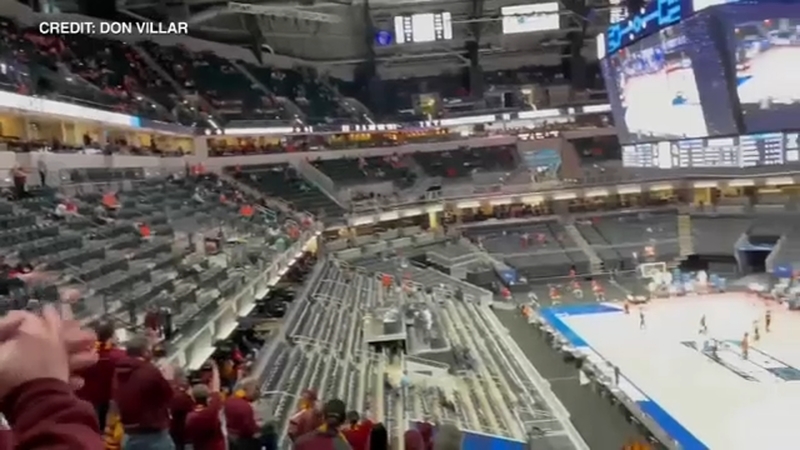 Loyola Chicago fan celebrate U of I upset in Indianapolis

CHICAGO -- The University of Illinois and Loyola Chicago faced off in the NCAA men's basketball tournament Sunday.

The Ramblers defeated the Fighting Illini 71-58 in the second round of the tournament and became the first team to move on to the Sweet 16.

A fully-vaccinated Sister Jean is in Indianapolis this week to cheer on her Loyola Ramblers in the NCAA tournament.

Illinois, the Big Ten tournament champions, was the first seed in the Midwest. The team defeated Drexel 78-49 in the first round.

Eight-seed Loyola took down Georgia Tech 71-60 in the first round of the tournament.

"I think it's great for Illinois basketball. I mean you got two ranked teams going at it. It's been a basketball-passionate state. I know the city of Chicago is, and I know Champaign is, and to see that, going for a ticket for the Sweet 16. I know there'll be a lot of eyes in basketball at the forefront, not only in the state, but in the country," said Porter Moser, Loyola head coach.

"It's very easy to get wrapped up in the storylines. I don't I have to look it at from a basketball perspective of, you know, next game. It's great for our state. I think it speaks volumes for their program and the job Porter's done. It can't be anything but great for the state," said Brad Underwood, Illinois head coach.
Report a correction or typo
Related topics:
sportsillinoischicagochampaign urbanaloyola ramblersncaacollege basketballillinois fighting illinibasketball
Copyright © 2022 KABC Television, LLC. All rights reserved.
COLLEGE BASKETBALL
UCLA, USC limit spectators at indoor athletic events as omicron surges
USC swim coach being investigated over alleged abusive behavior
New docuseries 'The Lost Season' follows college recruiting journey
USC team plane tips backward on tarmac with coaches still on board
TOP STORIES
Man accused of fatally stabbing UCLA grad student arrested
Biden, 1 year in, says nation weary from COVID but in a better place
Family seeks justice for teen found dead along freeway in South LA
Starbucks no longer requiring US workers to be vaccinated
Cardi B offers to pay for funerals of all 17 Bronx fire victims
French actor Gaspard Ulliel dies after ski accident
Vice President Kamala Harris to visit San Bernardino on Friday
Show More
'Weird Al' biopic to star Daniel Radcliffe in title role
Felony charges are 1st in a fatal crash involving Autopilot
COVID test sites open in Hawthorne, San Gabriel Valley to meet demand
Northern California teen nails perfect SAT score
Website for free COVID tests is here. How does it work?
More TOP STORIES News