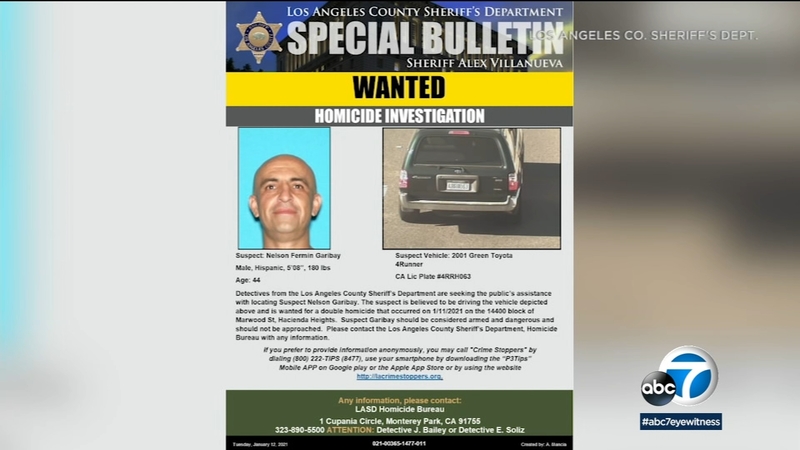 HACIENDA HEIGHTS, Calif. (CNS) -- A 44-year-old man identified as the suspect in the baseball bat killings of his 65-year-old mother and 73-year-old stepfather inside a home in Hacienda Heights is being sought by authorities.

Detectives named Nelson Fermin Garibay as the suspect wanted in connection with the deadly attack that took place Monday in the 14400 block of Marwood Street and also injured his 37-year-old brother, according to the Los Angeles County Sheriff's Department.

Deputies who responded to an assault with a deadly weapon call at the home were met outside by a man who said he had been attacked by Garibay, the department said.

The injured man led deputies inside the home where the two other victims were found. Each had sustained significant head trauma and were pronounced dead at the scene. The injured victim was taken to a hospital with non-life-threatening injuries, according to the department.

Another employee of the Los Angeles Police Department has passed away of complications from COVID-19, the department announced Wednesday.

The woman was identified by the Los Angeles County coroner's office as Irma Ruiz De Garibay.

Detectives later learned Garibay had attacked his victims with a baseball bat and left the area in an unknown direction in a green 2001 Toyota 4Runner with California license plate 4RRH063, authorities said.

Garibay is Hispanic, 5-feet-8 inches tall and weighs 180 pounds. He is believed to be armed and dangerous.