California residents are being asked to quarantine when traveling to NY, NJ and CT 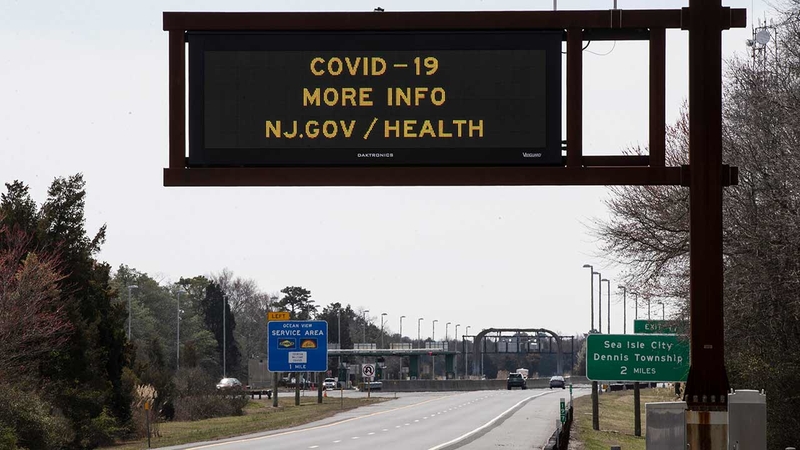 NEW YORK -- New York, New Jersey and Connecticut have doubled the number of states for incoming travelers to undertake a 14-day quarantine.

Eight states have recently been added to the list that now stands at 16, including California, Georgia, Iowa, Idaho, Louisiana, Mississippi, Nevada and Tennessee.

The other states on that list were announced last Wednesday are Alabama, Arkansas, Arizona, Florida, North Carolina, South Carolina, Texas and Utah.

Under the travel advisory, individuals traveling to or returning to New York, New Jersey and Connecticut from states with increasing rates of COVID-19 are advised to self-quarantine for two weeks. This includes travel by train, bus, car, plane and any other method of transportation, officials said.

The 14-day quarantine travel advisory applies to travel from states identified as those that have a positive COVID-19 test rate higher than 10 per 100,000 residents or have a 10% or higher positivity rate over a seven-day rolling average, officials said.

The self-quarantine is voluntary, but compliance is expected.

As airline travel continues to increase amid the coronavirus pandemic, here are some tips from LA emergency medicine physician Dr. Michael Daignault before you hit the skies.

According to officials, the advisory does not apply to any individual passing through designated states for a limited duration through the course of travel. Examples include: stopping at rest stops for vehicles, buses, and/or trains; or layovers for air travel, bus travel, or train travel.

Individuals who are traveling to New York, New Jersey or Connecticut from impacted states for business are exempt.

The travel quarantine announced on June 24 by New York Gov. Andrew Cuomo applies to everyone entering the Tri-State region, including New Yorkers returning home from elsewhere.

Washington was also on the list initially, but the state was removed June 24 after New York officials reviewed the state's data, saying, "There was a temporary discrepancy with Washington State's reporting, however, they have since corrected it and we have removed them from the list of states under travel advisory."

RELATED: Summer travel expected to decline by 15% as COVID-19 concerns mount amid surge in cases, hospitalizations

The quarantine list is based on a formula. If the states have 10 positive cases per 100,000 residents, or if 10% of their total population is infected, states can be added or taken off the list.

This is what has been predicted from the beginning, that there would be a rolling curve with different areas of the country being impacted at different times.

The question on many people's minds now is, how will this be enforced?

The three governors are relying on people to report others who violate the quarantine.

Lamont said the state is stopping short of imposing fines for violations, but will ramp up penalties if necessary.

If you're caught in violation in New York, on the other hand, you will face mandatory quarantine and thousands of dollars in fines.

"It's only for the simple reason that we worked very hard to get the viral transmission rate down," said Gov. Andrew Cuomo. "We don't want to see it go up, because a lot of people come into this region, and they could literally bring the infection with them. It wouldn't be malicious or malevolent but it would still be real."

Because of the high number of cases in the United States, the European Union is considering a temporary ban on American tourists.
The ban would also include those traveling from Brazil and Russia.

The E.U. issued a statement saying in part, "restrictions should remain in place for countries whose situation is worse than in the E.U."

When it comes to those wanting to travel to the Tri-State area after visiting any of the eight states currently on the quarantine list, the governors say there is a simple solution: get a test once returning to find out if you've been exposed.
Report a correction or typo
Related topics:
health & fitnesscaliforniahealthandrew cuomomedicalcoronavirus californiacoronaviruscoronavirus outbreakcoronavirus pandemiccoronavirus new yorkreopen nycovid 19 pandemiccovid 19 outbreakcovid 19
Copyright © 2022 WABC-TV. All Rights Reserved.
CORONAVIRUS CALIFORNIA
15-month-old is youngest person in LA County to die of COVID
COVID pills in short supply, but here's where you can find them
COVID-19 transmission rates are falling across California
Will a second COVID booster shot be recommended soon?
TOP STORIES
15-month-old is youngest person in LA County to die of COVID
Man who sparked probe into Kobe Bryant crash photos speaks out
Shooting on 5 Freeway in Sylmar leaves driver wounded
Statue honors Kobe Bryant, daughter Gianna at Calabasas crash site
LA City Councilman Mike Bonin says he won't seek reelection
Amy Schneider's historic 'Jeopardy!' run comes to an end
Santa Ana mail carrier surprises boy with cancer with his own truck
Show More
Cardi B wins $1.25M in defamation lawsuit against YouTuber
LACMA turns music into art for Interscope Records exhibit
Kaiser to be sued after mom of 3 denied COVID shot dies, lawyer says
Husband who lost wife in crash that killed Kobe Bryant still healing
Student stabbed during fight with another student in Westlake: Police
More TOP STORIES News