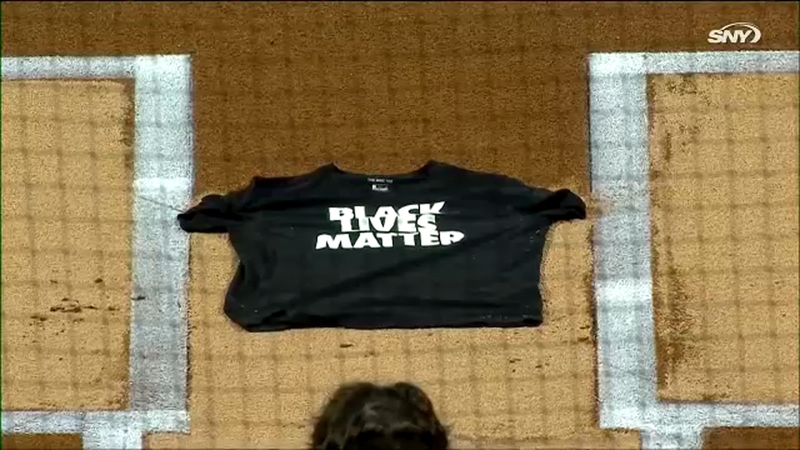 Mets briefly take field for demonstration, then walk off field

NEW YORK -- The New York Mets took part in a dramatic protest at Citi Field, but apparently, some of the Mets' own leadership did not want it to happen.

The Mets and Miami Marlins took the field, suited up, but they never started the game.

Instead, they stood together for 42 seconds of silence in honor of Jackie Robinson.

Then both teams left the field, leaving behind a Black Lives Matter t-shirt on home plate.

"This is way bigger than baseball. This is life, this is humanity. We're not going to just shut up and dribble, shut up and play ball. We're going to stand up for what we believe in," said Dominic Smith, New York Mets first baseman.

Players had been discussing boycotting games after the shooting of Jacob Blake, a Black man, by police in Kenosha, Wisconsin.

The situation got messy afterward. Mets General Manager Brodie Van Waganen got caught on a hot microphone, explaining that instead of taking a night off, MLB Commissioner Rob Manfred wanted just a one hour protest with players returning to the field.

"I said, 'Jeff that's not happening. They're not playing,' but that's Rob's (Manfred) instinct, exactly what you and I were talking about, at the leadership level he doesn't get it, he just doesn't get it," Van Waganen said.
Van Waganen later apologized for airing that private conversation in public.

It was later revealed the idea actually came from the Mets COO Jeff Wilpon, not the commissioner.

Manfred later responded, "I have not attempted in any way to prevent players from expressing themselves by not playing, nor have I suggested any alternative form of protest to any club personnel or any player. Any suggestion to the contrary is wrong."

The Mets are expected to play Friday night.